The Topps Company redefined the trading card collecting hobby during the 1950s, and two of the most coveted sets from that era were heavily pursued by the most condition-conscious hobbyists at Heritage Auctions’ PSA Set Registry Auction in Dallas, which closed March 23.

The 1955 and 1958 Topps sets, which rank second and fourth, respectively, on the PSA Set Registry, were sold as individual single-card lots in the Extended Bidding format sale. 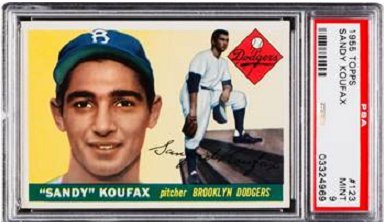 “It’s a lot of hard work to build a top-five set,” Heritage Sports Director Chris Ivy said, “but the joy is in the journey, and this auction stayed true to that principle.”

The top items sold in the auction included, but were not limited to: