For serious memorabilia collectors, owning a handful of well-preserved Super Bowl tickets is considered a rite of passage. A complete set of PSA-graded full tickets? Well, that is the mother lode, and it can take decades to build a set of elite stature. That is, until now. SCP Auctions is humbled to present the “Holy Grail” of ticket collections, a complete run of Super Bowl I though 50 full unused tickets with the highest overall PSA grade point average ever for a set offered publically.

It should be noted that a complete set of Super Bowl I-50 tickets did come to auction in February; however, its SMR value was significantly less and its weighted GPA would be much lower if PSA registered. There may never again be a better collection, let alone complete run, of Super Bowl tickets to hit the auction block. 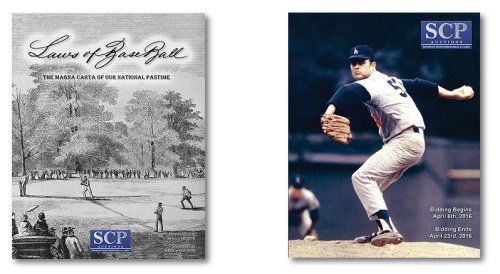 View the free digital version of our print catalog. This is a user-friendly, virtual edition of our soft cover catalog that is available for your viewing pleasure.