Heritage Auctions is proud to present one of the most significant Babe Ruth game-used bats ever to hit the auction block – a 47 ounce Hillerich & Bradsby war club that is accompanied by a signed letter from the Sultan of Swat, attributing it to his record 59th home run of the 1921 season. Carrying a pre-auction estimate of $500,000+, the bat is one of several highlight pieces already in-house for the highly anticipated New York Platinum Night event, Scheduled for Saturday, February 21st, 2015 at the Fletcher Sinclair Mansion.

An excerpt from the full item description reads as follows:

Leading bat expert John Taube graded it a perfect PSA/DNA GU 10, and assesses the game use as “excellent,” noting several prominent ball marks on the left barrel, correct for Ruth’s label-down batting stance, and cleat marks throughout. Defined lathe marks appear on knob and barrel end. Center brand and barrel stamping are deeply burned and flawless. The bat retains its original finish, which has aged beautifully and today exudes a rich mahogany tone. 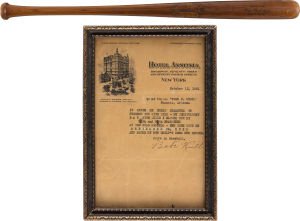 (after Ruth himself). While that purported label has been lost to history, we do have the original letter that accompanied the bat. It reads as follows:

It gives me great pleasure to present you with this-my trustworthy bat with which I batted out my 57th and 58th [corrected to 59th] home-runs at the Polo Grounds-New York City on September 26, 1921 and broke my own world’s home run record.

The letter is typed on the letterhead of the Hotel Ansonia on the Upper West Side of Manhattan, the home of not just Ruth but also fellow Yankees Wally Schang, Lefty O’Doul and Bob Meusel. The hotel had a well-earned reputation in those days for hedonism, drawing a mix of gamblers, athletes and socialites from reigning Heavyweight Champion Jack Dempsey to Florenz Ziegfield, the biggest name in burlesque. It was in Chicago White Sox first baseman Chick Gandil’s room at the Ansonia that the conspiracy to throw the 1919 World Series was born.

And it was here that the Babe, who often roamed the corridors in a silk robe as if the entire building were merely an extension of his personal suite, made the acquaintance of brothers Harry and Fred Weber, the former serving as Ruth’s booking agent for vaudeville engagements prior to the emergence of Christy Walsh. A New York Times article dated October 28, 1921 reports on the profitable relationship:

“The home run king will take his first turn at bat as a thespian in the Keith Theatre in Boston on Monday, Nov. 7…Ruth’s contract with the Keith organization calls for twenty weeks at the modest salary of $3,000 per week. At the signing of the contract Ruth was represented by Harry Weber, who will manage him during his theatrical career…”

The closing line of the article states:

“The Babe has turned over his treasured home run bats and balls to the Keith people for advertising purposes, and they will be featured in the lobbies of the theatres in which he is playing before and during the big league engagement.”

While any bat wielded by the greatest name in baseball history is properly considered an American treasure, it must be stressed that the listed representation finds itself in an elite class that could be enumerated on a single hand. It’s unquestionably the most significant Ruth home run bat to cross the hobby’s auction block since the one that launched the first home run at Yankee Stadium in 1923 commanded $1.3 million over a decade ago, the heaviest known, and the only example in private hands accompanied by the Babe’s own signed letter of provenance.

The consignment deadline is December 31, 2014 and limited Space is available for elite material. For all consignment inquiries, please contact a Consignment Director today!