These are the final days to consign items to the next Goldin Auction scheduled to close in June. If you are interested in consigning anything to this auction, please email Goldin Auctions immediately at info@goldinauctions.com. Goldin Auctions is particularly looking for:

Goldin Auction’s April 2013 auction has solidified Goldin Auctions as one of the premier auction houses in the sports memorabilia industry. The media attention around the Honus Wagner T206 card, which broke a record for the most ever paid for a baseball card in a public auction, was nothing short of unbelievable. Prior to the auction close, Ken Goldin appeared multiple times on CNBC and Bloomberg TV reaching bidders who previously were not collectors of sports memorabilia. See the card from the auction here.

The people Goldin Auctions now has in their database also translated into phenomenal results for other items as well. For example:

These are just a few examples of the type of prices realized by Goldin Auctions. In addition, Goldin’s low 10% buyer’s premium also helps put more money into the consignor’s pocket and all consignors are paid within 30 days of the auction close. 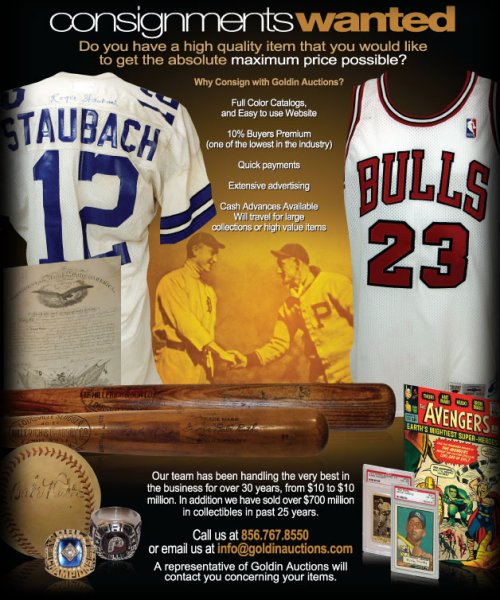