Who were they, and what happened to the 1930-32 Phoenix Senators? Five years before the big leagues attracted crowds to night games, they played under the lights at Riverside Park in the booming American southwestern town of Phoenix. A village of hardly 10,000 in the pioneer days of 1910, Phoenix would grow to a proper city of over 50,000 by the ’30s, shortly thereafter exploding into the metropolis that it is today, counting nearly half a million Phoenicians among its ranks by the late 1950s, after experiencing one of the fastest booms in American history.

So fast was its growth in the first half of the 20th century that many historians do not know that Phoenix was home to one of the finest and most respected baseball clubs its side of the Mississippi during the ’30s. Not even the fine folks at SABR and Baseball-Reference.com know the full line-ups for the Senators and other teams of the short-lived Texas-Arizona and Arizona State Leagues. Did you know, for example, that an 18-year-old Harry Lavagetto was a Senator? Also, the famed backstop for the Oakland Oaks, Billy Raimondi, who holds the PCL record for longest career by a position player? Yeah, he was a teenaged Senator, too, and together they were the talk and the toast of the town. We know all this, and more, and when Small Traditions offers selections from the Edward “Harp” O’Malley collection in our highly anticipated Exclusive 100-Lot Spring Premium Auction this April, so will you. 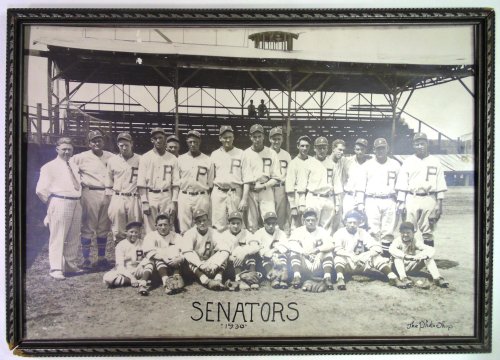 Working tirelessly to bring baseball to Phoenix in the 1920s, local sportsman Ed O’Malley, who had grown from rags to riches in less than a decade after starting his Uneeda Towel Supply Company during prohibition, was tragically killed in a mysterious train accident during the 1931 season. Both the team and the town reeled from the tragedy. In addition to being a sportsman and an all-around “good fella” — indeed, his favorite saying was “give a fella a break” — Ed was also a prominent businessman and influential socialite in the booming town, and without his inspired leadership, both the team and the entire Texas-Arizona League would fail before another year had passed.

IMPORTANT NOTE ABOUT CONSIGNMENTS WANTED FOR BOTH OUR MARCH AND APRIL AUCTIONS:

We will be accepting another 20 to 30 exceptionally high-end lots for our April Premium Auction. All lots must be valued at a minimum of approximately $1,000. This will be our finest auction ever, by far, so please call or write today if you’d like to join our small team and reserve featured space for your treasured collectibles, for free.

For the next week, we will also be accepting regular consignments for March’s Monthly Masterpieces Plus #29 Auction. Please call or write to discuss your collectibles today and to learn how you may qualify for our popular Cost-Free Grading and Collection Management Services.