The baseball cards produced by Cracker Jack in 1914 are among the most beautiful and identifiable baseball cards ever made – and, more than a century after their debut, among the rarest. No less an authority than the Society for American Baseball Research once noted that they are “the most impressive baseball cards issued during the Deadball Era,” even when considering the 1909-11 tobacco cards that continue to make a household name of a long-gone legend such as Honus Wagner.

These radiant-red “surprise inside” renderings of Ty Cobb, Shoeless Joe Jackson, Walter Johnson, Christy Mathewson and, yes, Wagner, too, “had the most eye-appeal of any card issued to date,” wrote John McMurray, chair of SABR’s Deadball Era Committee. There were myriad reasons for this, he wrote, among them: The Cracker Jack cards were nearly twice as large as the tobacco-card offerings, and they provided fans with brief, pointed biographies, while the backs of their cigarette counterparts featured only advertisements for product. 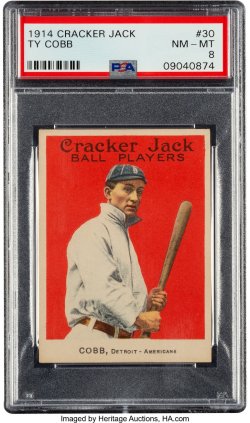 “But it is the detailed artwork and many action poses which make this set a perennial collector favorite,” McMurray wrote in 2018. “In some sense, these are baseball cards doubling as art.”

Heritage Auctions is honored to present in the Jan. 27-28 Winter Sports Card Catalog Auction the complete 144-card 1914 Cracker Jack Collection, belonging to a single consignor responsible for this historic offering. Among the set, 14 cards are the best-known examples, while 31 have but one graded higher.

“This is easily one of the most handsome and historic sets of cards we have offered in recent memory,” says Chris Ivy, Heritage Sports’ co-founder and president. “The 1914 Cracker Jack cards are far rarer than the set that followed in 1915, and the fact these cards survived this long and in this condition is just staggering, considering that most were often stained even before they were pulled from boxes by kids with fingers made sticky by the caramel coating.

“Our consignor spent years diligently assembling this stunning collection, often finding the very best and the most beautiful of the scant survivors, and to offer these gems 108 years after production is, itself, something of a historic event for the hobby.”

Indeed, so breathtaking is this assemblage that it ranks as the third Current Finest in the PSA Set Registry, its combined GPA north of EX 5. Translated: This collection features some of the finest Cracker Jack cards in existence.

To find these cards in any condition is miracle enough, given the way they were distributed. But to see them in these conditions – as though brand-new, newly minted, untouched and unscathed – is nothing short of miraculous. And as SABR’s McMurray pointed out, they offer the best glimpses of Deadball heroes at their on-the-field finest. 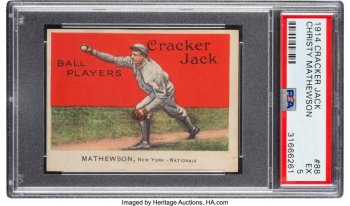 “Here, among the Cracker Jack cards, are the best baseball card images of Shoeless Joe Jackson’s swing, of Walter Johnson’s pitching motion, and of Ty Cobb’s glare,” McMurray wrote. “The action shots, too, are magnificent: Chick Gandil reaching for a ball at first base is a beautifully done horizontal image, as is that of Ray Keating pitching. Then there are the catcher poses, with Hick Cady, Ted Easterly, Les Nunamaker, Frank Owens and Wally Schang shown in action in full catcher’s gear. The portraits of Charles Comiskey and Connie Mack seem to capture their respective professional reputations.

“If you would like to see a commanding picture of John McGraw, a side view of Gavvy Cravath at bat, or a pensive pose of Honus Wagner, these sets are the place to look. Surely, no better card of Smoky Joe Wood has ever been produced than in the Cracker Jack sets, and there is a sometimes-overlooked card of Branch Rickey as manager of the St. Louis Browns.”

Here are players from the National and American Leagues, alongside representatives from the short-lived “renegade” Federal League, among them George Suggs sporting the uniform of the forgotten Baltimore Terrapins and Walter Blair of the Buffalo Blues.

This is a collection to which an entire book has been devoted: The Cracker Jack Collection: Baseballs Prized Players, published in 2013 to celebrate its centennial anniversary and short-lived existence, as the outbreak of World War I forced the company to bench its baseball cards.

“To own something that most people know mainly from history books or museum exhibitions isn’t an opportunity that happens too often,” Ivy says. “To offer these Cracker Jack cards as a complete collection is nothing short of a privilege and an absolute pleasure.”