Crazy Uncle Auctions Summer 2020 Auction is now open for bidding with over 1,700 lots up for bid.  This sale which will run until a 6:00 pm EST close on Saturday, June 27, 2020 features sports memorabilia, autographs, sports cards, Americana, and more. Bid, view and register for the auction at crazyuncleauctions.com.

On the evening of June 15ththe Crazy Uncle Auctions BIG Summer Auction kicked off with a bidding frenzy. “It has been a free-for-all since the opening bell” said auction house president Aaron Rothschild. The auction will run strong with fierce online-only bidding until June 27th with a hard close at 11:00 pm EST at crazyuncleauctions.com.

The highest graded example of a scarce 1911 T3 Christy Mathewson card who’s SMR value is charted at $17,500 sits in the top 10 items of the auction along with a program and ticket from the 1923 Opening Day of Yankee Stadium vs. the Boston Red Sox, both the program and the ticket are expected to realize over $15,000 each.

The auction shows love to Michael Jordan with an unbelievable signed 1986 Fleer Rookie Sticker graded 9 MINT. Kobe Bryant is represented with a 2019-20 Panini Hoops autographed card from what was possibly his last autograph signing.

The next generation of NBA talent is at the 10 spot with an unopened case of 2019-20 Panini Prizm Basketball cards, the hottest set on the market.

The post-war baseball card section is strong with over 350 1952 Topps cards, and Mantle, Mays, Aaron, etc. cards galore from throughout the 50’s and 60’s. Among the modern era the auction is heavy on Derek Jeter, Mike Trout and Pete Alanso rookie cards. Modern football has all the quarterback rookies you are looking for Tom Brady, Aaron Rodgers, Patrick Mahomes, Josh Allen, Sam Darnold, Baker Mayfield and more.

There is a tremendous section of museum-worthy historical documents, cuts and cards. The top-tier of historical collecting is represented with items hand-signed by George Washington, Benjamin Franklin, Abraham Lincoln, nearly all the US Presidents and Vice Presidents. There are signed items from The Beatles and historical figures such as Charles Dickens, Mark Twain, Orville Wright, Helen Keller, Houdini, and more.

There is something for everyone in this auction. 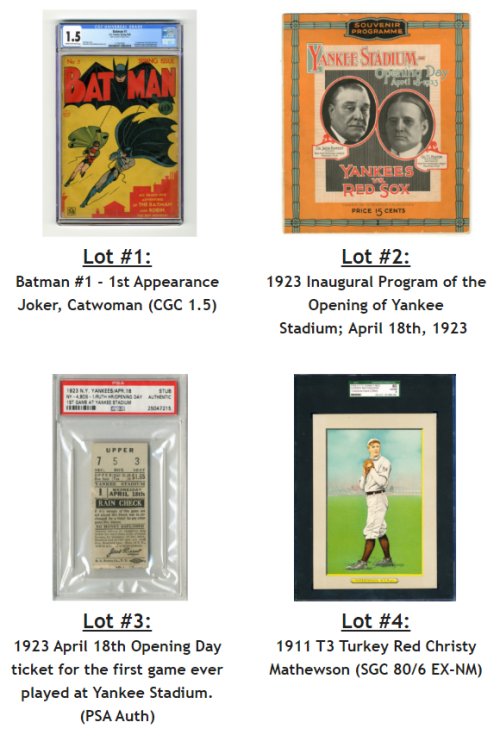