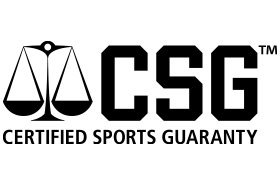 Two examples of the iconic 1952 Topps #311 Mickey Mantle card that were recently authenticated and graded by Certified Sports Guaranty (CSG) are now being offered to the public. The cards are at center stage in the 2022 Fall Premier Auction presented by SCP Auctions, a California-based leader in sports collectibles. Bidding concludes on December 10, 2022.

One of the two cards is graded CSG 8, making it the most valuable card that CSG has certified since it launched in early 2021. SCP gives it an estimate of at least $1.5 million. 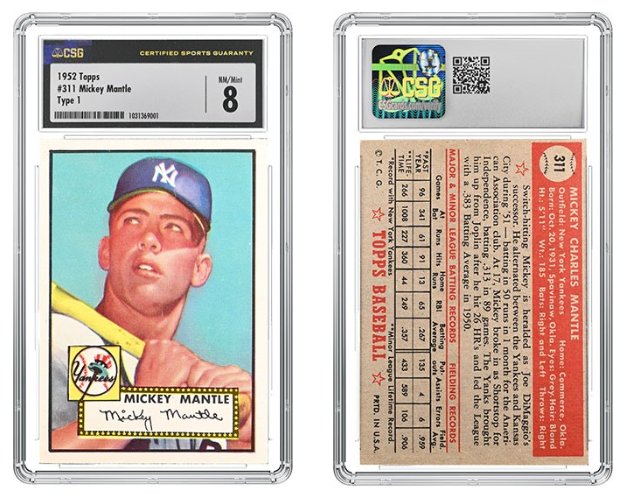 One of the two cards is graded CSG 8, making it the most valuable card that CSG has certified since it launched in early 2021. Fewer than 20 are graded higher out of about 2,000 in the world (including one that sold for $12.6 million in August 2022, setting a record for most expensive sports card at auction). SCP gives this CSG-certified card (lot 1) an estimate of at least $1.5 million.

“The surface of this card is near flawless, the color is exceptional — it’s a piece of art,” said Andy Broome, Vice President of CSG. “I can’t state enough how beautiful this card is.”

In addition to the Type 1 example graded CSG 8, CSG also certified a Type 2 example. SCP is also offering that card, which is graded CSG 4.5, in this auction (lot 7).

On its certification label, CSG attributes the type of the Mickey Mantle #311 card. Minor differences, such as the direction of the seams on the baseball on the back of the card, distinguish the two types. To learn more about the differences, click here or watch the video below.

CSG is part of the Certified Collectibles Group (CCG), whose affiliates have certified nearly 75 million collectibles. These include one of the world’s most valuable coins, a Brasher Doubloon certified by Numismatic Guaranty Company that realized $9.36 million in January 2021; and a Superman #1 comic book graded by Certified Guaranty Company that realized $5.3 million in January 2022. Now the year is set to end with another seven-figure sale of a collectible certified by a CCG company.