The first American flag to arrive at Utah Beach during D-Day in 1944, and auctioned by Heritage Auctions in June 2016, will arrive at the National Military Museum in the Dutch city of Soesterberg 15 September, and will be received and accepted with a military ceremony to launch a special exhibition on the flag.

The flag was purchased in spirited bidding for $514,000 by Bert Kreuk, a Dutch art collector who lives in Switzerland and New York. A long-time collector of Contemporary and Impressionist Art, Mr. Kreuk purchased the flag for personal reasons: “This is one of the most important historical American Flags ever to come to auction; a symbol of our freedom. And with our freedom I mean that of Europe in particular,” he said.

The flag will be in the presence of Defense Minister Jeanine Hennis-Plasschaert and about 20 American World War II veterans. The American, 48-star flag was flown on the stern of the US Navy ship LCC 60. This was the leading vessel on 6 June 1944, responsible for directing the invasion fleet and the first American troops to Utah Beach. The Normandy landings were the beginning of the liberation of Western Europe. 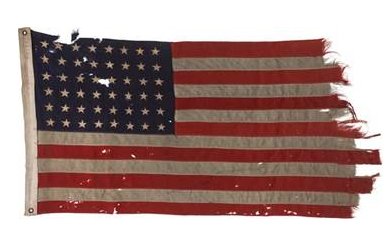 For the Kreuk family, the flag is a symbol of the sacrifices made by the Allied soldiers for the freedom of Europe. Mr. Kreuk believes this freedom can never be taken for granted — not then, and not now. The flag is on long-term loan to the National Military Museum.
“Last year I visited Normandy in person with an uncle of mine,” he said. “This was a very emotional trip; family members of ours were killed during the bombing raids on Rotterdam in 1940. Those who survived suffered hardship beyond belief, especially because of hunger during the ‘hunger’ winter of 1944.”

“These family members survived thanks to the liberation made possible by all of those who participated,” he continued. “We owe a lot of gratitude to all those nations, but in particular the United States. Once I heard that this special flag was coming to auction, I knew I had to buy it. Not only because of our personal family history, but more important because of all those young and brave Americans who gave their lives so we in Europe can live in freedom.”

“I believe it was fated that the flag had to come to our family, especially after our trip to Normandy last year. My uncle (whose family members died in the war) was with me during the bidding. After I told him that we were the successful bidder, he cried. This was so special. With the purchase of this flag our family history has come full circle. I am going to publicly show the flag and make sure that the important story this flag represents will be kept alive.”

At the request of the Kreuk family, the Ministry of Defense will facilitate the arrival of the flag in the Netherlands. The Ministry of Defense would like to show its gratitude for the sacrifices made for our freedom, which are represented by this flag. The National Military Museum will exhibit the flag in a special way, focusing on the D-Day invasion in Normandy and the symbolism of the American flag. The exhibition will run until the end of this year.

The flag will arrive by Chinook helicopter at the National Military Museum on the runway of the former air base in Soesterberg, Netherlands. It will be marched along an honor guard of American and Dutch soldiers. It will then be handed over by the Defense Minister, in the presence of the family that acquired the flag, to the director of the National Military Museum, Mrs. Hedwig Saam. Then museum will the open its special exhibition on the flag.