Dated April 8th, 1992, a scouting report that would go down in history reads, among other things, “Above avg. arm., quick rel., soft hands, & quick bat.” Yankees Free-Agent Scout Dick Groch was analyzing a player who would go on to become the best shortstop for the game of baseball’s most storied franchise. This document, along with the game-used and photo-matched road Yankees jersey Jeter wore for his MLB debut on May 29th, 1995, make up an unmatched collection of memorabilia from the soon to be Hall of Famer and will be up for bids in the Goldin Auctions 2020 Winter Auction from January 20th through February 22nd at GoldinAuctions.com.

“MLB Shortstop. Blue Chip. A Yankee. A Five tool player will be a ML Star +5!!”, the scouting report goes on to read. Derek Jeter somehow fell to the Yankees at the sixth pick in the 1992 draft and the Kalamazoo Central High School standout was on his way to the Big Apple and ultimately Cooperstown. 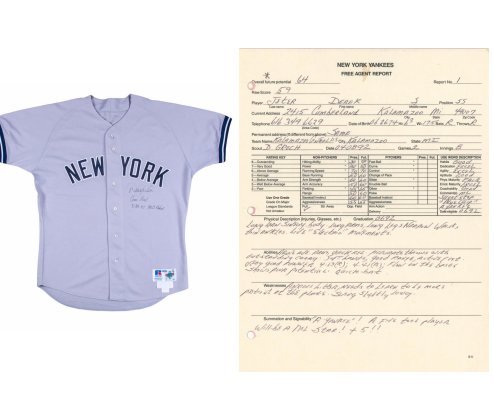 The MLB Debut Jersey worn by Derek Jeter that is also available in Goldin’s Historic Winter Auction is expected to break every record in the hobby. Originally worn by Bernie Williams in 1994, the jersey donned by Jeter for 15 games during his first callup with the club in 1995. Among many of the unique aspects of this jersey are the remnants of the #7 and black armband on the left sleeve in rememberance of the passing of Mickey Mantle in August of 1995. Signed by Jeter and inscrtibed “Game Used 5-29-95 MLB Debut ” this jersey is one of a kind on numerous levels and the most sought after jersey of the Yankee legend’s great career. With Aaron Judge’s MLB Debut Jersey selling for over $160,000 in 2017, this one is is sure to sell well beyond that. Jersey is photo matched and comes with a photo-match LOA from Sports Investors Authentication

“Derek’s upcoming Hall of Fame induction is undoubtedly well deserved.” said Ken Goldin, Founder of Goldin Auctions. “Being able to bring what are two of the most unique and valuable Derek Jeter pieces to the public just prior to the induction is truly an honor for us at Goldin Auctions”.