A pair of Derek Jeter jerseys sold for more than $530,000 while Steve Christoff’s 1980 Olympic gold medal and gold medal game-worn jersey combined to sell for over $436,000 in the Goldin Auctions 2020 Winter Auction on Saturday night. With a final sale price of $369,000, Jeter’s first Yankees jersey becomes the highest priced modern-era jersey ever sold, surpassing the Mike Piazza post-911 home run jersey. Similarly, timed with the 40th anniversary of the “Miracle on Ice”, Christoff’s Gold Medal set a new standard for prices realized for one of the medals from the historic team. In all, the auction generated $5 million in sales and once again established a record for most bidders to ever participate in a Goldin Auctions event.

“The selection of historic jerseys, trading cards, bats and more that we assembled was truly remarkable, so it’s not surprising that so many new record prices were established,” said Ken Goldin, Founder of Goldin Auctions. “We want to thank our consignors for allowing us to sell these remarkable collectibles and congratulate our bidders for adding these rare items to their collections.”

Goldin Auctions is currently accepting consignments for its annual Spring Auction. Here’s a look at some of the marquee items and final sale prices from the Winter Auction. The full catalog is available at GoldinAuctions.com. 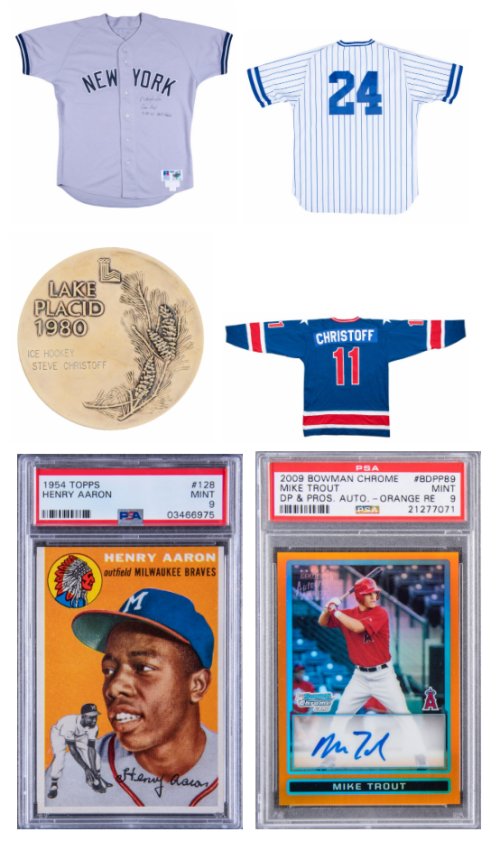 Lot #3 – 1980 Steve Christoff Game-Worn “Miracle on Ice” USA Olympic Hockey Jersey from Gold Medal Winning Game – This blue jersey was worn by Christoff when his goal tied the game and inspired his team to do the impossible and win gold with a 4-2 victory over Finland. (FINAL PRICE: $116,850)

Lot #16- 2019 Donald Trump Autographed Set of Impeachment Documents from House Judiciary Committee -Trump signed the title page in bold black marker across the page. Comes with a letter of provenance from Jonathan Moore, who states in his letter that he “attended President Trump’s rally in Battle Creek, Michigan on December 17, 2019 and asked him to sign the Articles of Impeachment.” Additionally, there are LOAs from Beckett Authentication and PSA/DNA for Trump’s signature. The most ever paid for a Donald Trump item. (RECORD PRICE: $81,180)

Lot #4 -1960 Heisman Award Presented to Al Helfer For Lifetime Contributions as Master of Ceremonies For The Annual Heisman Banquet – Al Helfer, who was a longtime emcee for the annual banquet held by the Downtown Athletic Club, was presented this honorary trophy in 1960 for his many years of service. It was made to the exact specifications presented annually to college football’s top player. (FINAL PRICE: $59,400)

About Goldin Auctions: Sports memorabilia impresario Ken Goldin has sold more than $700 million in memorabilia from many of the biggest names in sports, history and pop culture and was the pioneer of using the medium of television to sell sports memorabilia. Over the past few years, Goldin Auctions sold a Honus Wagner T206 card for a public sale record $3.12 million, Babe Ruth’s 1918 contract for a record $1.02 million, the Mike Piazza Post-9/11 home run jersey for $365,000, the 1979-80 Wayne Gretzky PSA GEM MT 10 rookie card for a record $465,000 and a 2003-04 LeBron James/Michael Jordan Upper Deck Exquisite Logoman card for $900,000. Goldin Auctions strives to break new ground and offer collectors the best in collectible treasures up for auction in the marketplace. Goldin Auctions is the official auction partner of the Naismith Memorial Basketball Hall of Fame, the Jackie Robinson Foundation and the Babe Ruth Birthplace and Museum. For more information, visit goldinauctions.com.