Over a dozen golf medals from the career of accomplished amateur golfer Dick Chapman are sure to generate a great deal of interest in the upcoming auction from Worthridge. Chapman enjoyed a long and successful career in amateur golf, puncuated by victories at the 1940 US Amateur and the 1951 British Amateur. He was also a member of four Walker Cup teams. In all, Chapman won the amateur championships of five different countries. Time magazine called him “the Ben Hogan of amateur golf.”

The centerpiece of this collection is Chapman’s medal from the 1951 British Amateur. Played in Wales at Royal Porthcawl, the 1951 British Amateur had a field that included four handicapper Bob Hope. In the championship match, Chapman took on Oklahoma oilman and fellow amateur golf legend Charlie Coe. Chapman easily dispatched Coe, winning 5 and 4. 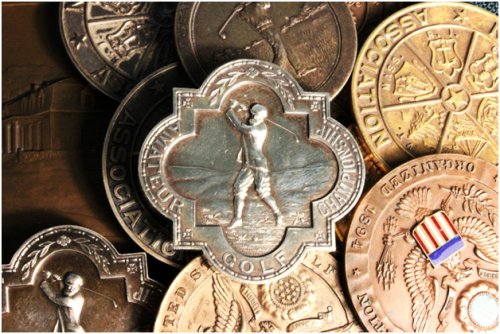 The medal is made of nine karat gold and weighs an impressive 59 grams. It features a golfer in knickers and traditional golf hat in his back swing on the front and “Amateur Championship” on the front. “Winner 1951” is engraved on the back.

Worthridge is proud to present the Dick Chapman collection, and all items will be a part of their second Sports Memorabilia Auction, running from November 19 until December 6.

Worthridge is the culmination of over 20 years of sports memorabilia and collectibles experience. The company began as a small baseball card store, and over the years has offered some of the finest memorabilia to ever enter the market.