Huggins and Scott’s sixth Masterpiece Auction of 2014 has begun with the bidding closing on Thursday night December 11th with the 30-minute rule beginning at 11:00pm eastern time.  This auction is headlined by the “Don Sparks Collection” — a long-time collector from Cleveland, OH. Don has trusted us to sell his prized collection featuring autographs, cards and memorabilia from the past century.

This is another sale with tremendous investment-quality pieces from all sports and the historical and political worlds. It features another amazing array of items that caters to every level of collector and investor. Whether you only want to spend a few hundred dollars or several thousand dollars, our selection of quality items has a little something for just about everyone.

Vintage card collectors will enjoy an abundance of pre-and-post war rarities including professionally graded and raw examples of cards from a variety of designations, including Ty Cobb’s, Babe Ruth’s, Lou Gehrig’s, Christy Mathewson’s, Cy Young’s and more; a number of graded and ungraded tobacco and candy cards offered as singles and in lots, and much more. Highlights include: a pair of the highest graded 1937 Flip Books: Jimmy Foxx (BVG 8) and Joe DiMaggio (BVG 5); a very rare E135 Collins-McCarthy Blank Back Shoeless Joe Jackson (SGC Auth); a N172 Old Judge John Ward (PSA 3 mk) and many more. 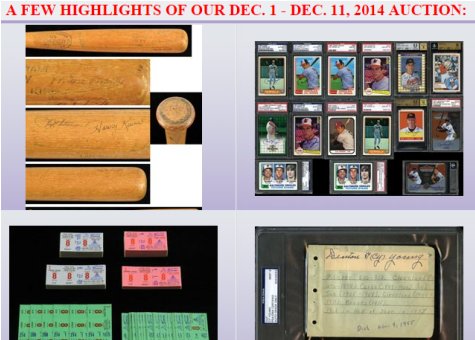 Staying in the memorabilia category, we are pleased to offer a tremendous selection of vintage publications, tickets and press pins from the turn-of-the-century to modern day and lots more.

If you don’t collect baseball items, we have a terrific selection of some high-end pieces from the other sports including a wonderful selection of football, basketball and hockey lots and near sets. Highlights include a completely PSA graded 1960 Fleer Football set (#9 on registry); a rare 1926 Red Grange Shotwell Candy wrapper; a stunning 1962 Cleveland Browns team signed football with Ernie Davis and many others.

If Non-Sports cards, coins/currency, comics, Americana or Political collecting is your cup of tea, we are offering a nice selection in those categories as well, including an unusually large number of high grade and valuable comic books with a 1960 Justice League of America #1; and hoard’s of unread comic lots from the 1970s.

Also, remember to check out our “Non-Catalog Internet Only” section of auction lots that are not found in the printed catalog, but there are plenty of great lots to bid on in that category.