A copy of the House of Representatives formal Articles of Impeachment full report hand signed by President Donald Trump at a rally in Battle Creek Michigan on December 17th, 2019, the evening before the formal vote took place, will be up for bids in the Goldin Auctions 2020 Winter Auction from January 20th through February 22nd at GoldinAuctions.com. 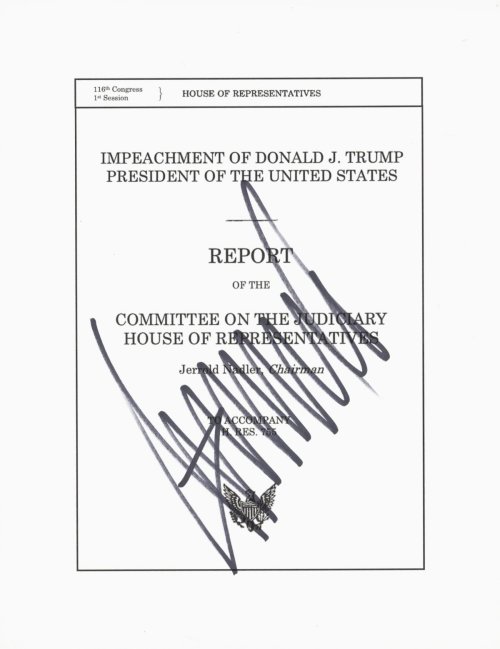 For only the third time in the history of the United States, the President of the United States has been formally impeached by the House of Representatives. Donald Trump, the 45th President has joined only Andrew Johnson and Bill Clinton in this historic distinction. The first account, Abuse of Power was voted mostly along party lines 230-197 while the second count, Obstruction of Congress, yielded a vote of 229 – 198.

Although a mainstay in the public’s conscience, politics has never been quite as polarizing as it has in recent years. Strategies, policies, and opinions can be argued, but what can’t be disputed is the historic times in which we currently live and this document is a microcosm of these times. Never has such a document been offered for sale, let alone being sold in auction during the President’s term in office.

“Along with the ironclad provenance, this document brings a historical factor rarely seen in modern memorabilia.” said Ken Goldin, Founder of Goldin Auctions. “Whichever side of the aisle you lean, this is an item that will undoubtedly be the prize of your collection”.