Heritage Auctions is partnering with some of Dallas-Fort Worth’s greatest and most beloved athletes for the In This Together Charity Auction Benefiting the North Texas Food Bank.

The food bank is experiencing demand like never before in its 38-year history. The images of lines of cars stretching for miles as people wait for hours to collect donated meals has been nothing short of staggering. A global pandemic has had a profound impact on our neighbors trying to remain safe and healthy – and hoping not to go hungry while doing so.

“Dallas is a generous city known for its giving and its can-do spirit, in the best of times and especially during the worst,” says Heritage Auctions’ co-chairman and CEO Steve Ivy. “There’s no better example of those qualities than its sports teams and their owners.” 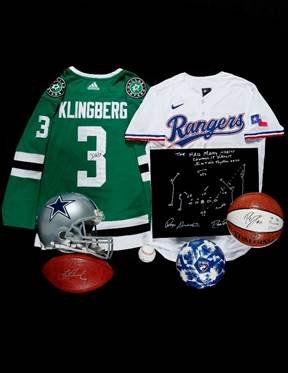 This is why Heritage Auctions, the world’s largest collectibles auction house, is proud to partner with the Dallas Cowboys, Dallas Mavericks, Texas Rangers, Dallas Stars and FC Dallas for this once-in-a-lifetime auction. Each team has generously donated items for this auction to help fill the North Texas Food Bank’s coffers during this difficult and desperate moment.

Bidding opens April 29 at HA.com/InThisTogether and runs through May 13, culminating with a live auction that begins at 8 p.m. Dallas time.

Among the one-of-a-kind items available during this special auction include a painted diagram of the legendary “Hail Mary” play – created and signed by none other than its mastermind, Hall of Fame Cowboys quarterback Roger Staubach. His partner on that play, receiver Drew Pearson, has also signed the piece. There will never be another keepsake like this one.

Dallas Mavericks Kristaps Porziņģis, Seth Curry, J.J. Barea, Maxi Kleber, Boban Marjanović and Delon Wright have signed jerseys, balls and photos – and added for this auction the phrase “In This Together 2020.” Dallas Mavericks owner Mark Cuban has also signed a ball with the name of this auction, which he helped encourage and inspire.

“When getting involved with charities, I look for places where I can have the biggest impact,” Cuban said. “And the North Texas Food Bank is such a place. The Dallas Mavericks are proud to be involved in an effort meant to help our neighbors in need.”

FC Dallas is also offering a rare Player for a Day Experience, which includes signing a real first-team contract, a video about the signing and a full FC Dallas kit. The winner will also have the opportunity to train with the FC Dallas first team during an upcoming training session. That will happen later, at a mutually agreed-upon date, but a team-signed ball is yours today.

The Dallas Stars are offering four plaza level tickets and a post-game meet-and-greet during the 2020-2021 season.

There are also signed jerseys, balls, helmets, sweaters and photos from local sports greats and Hall of Famers including Troy Aikman, Dirk Nowitzki, Michael Irvin, Luka Dončić, Dak Prescott, Pudge Rodriguez, Ezekiel Elliott, Joe Pavelski and Jerry Jones – to name but a few. Many of the athletes signed their pieces by adding “In This Together 2020.”

Everyone was eager to help when they heard that the North Texas Food Bank distributed 6 million pounds of food between March 15-April 15 – which is 1.5 million more than during the previous two months. More than 13,000 families have been served at the mobile pantries in just the past few weeks – with as many as 70 percent of those in-need clients who have never before sought help.

And as many people saw at Fair Park in mid-April, more than 2,220 families lined up for food. A normal day sees around 200-300 families.

“The North Texas Food Bank is experiencing a surge in demand during this pandemic that is unlike anything we have ever seen before,” said Trisha Cunningham, President and CEO of the North Texas Food Bank. “While the need is great, the community has also stepped up in a big way to support our work. Heritage Auctions’ In This Together event will undoubtedly put thousands of meals on the table at a very critical time. We are grateful for this innovative idea and for the many sports legends who have lent their names to this important cause.”