Memory Lane’s Winter Classic Auction could have just as well been called the “Classic Hits” auction.  Names that typically rock the hobby dominated the charts, setting some records along the way.

Nine of the top 12 selling items featured Babe Ruth, Lou Gehrig or Mickey Mantle, led by a 1921 American Caramel Series of 80 (E121) Ruth graded PSA 6.  One of three Ruth variations in the set, the card ranks as the second best on PSA’s Population Report.   When the auction closed early Sunday morning, the 96-year-old rarity had generated 113 bids and established a new record price at $115,626. 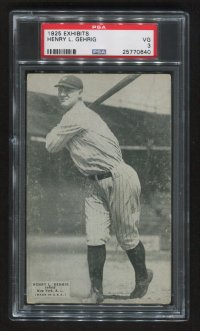 Original photographs dating from early in Ruth’s major league career are scarce and Memory Lane offered the chance to own one of the best:  a 1915 George Grantham Bain image of the young Babe in his Red Sox uniform with the trademark “Bain News Service” stamp affixed to the back. The 5×7 size “Type 1” image sold for $41,226.

Few cards of Gehrig were issued at the dawn of his legendary and tragic career with his oversized 1925 Exhibit generally considered his rookie card.  Memory Lane offered a PSA 3 (VG) example and it proved to be a major draw, achieving a new record price of $60,000. 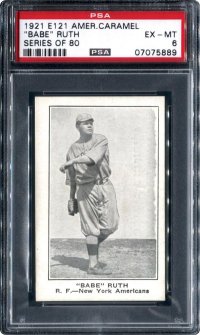 The auction also showcased a high-grade run of Hank Aaron cards, numerous T206s with rare backs and hundreds of high-grade rookie and star cards from the 19th century to the modern era.  It wasn’t all baseball, however.  A 1957-58 Topps Bill Russell rookie card graded PSA 8 sold for $24,576 while a PSA 9 example of Jerry West’s 1961-62 Fleer rookie card rocketed to $21,580.

Memory Lane’s next auction will be in early spring and the company is taking consignments.  Memory Lane’s next I Own It Now catalog is also in the planning stages and collectors can also consign to that event.  For more information, visit the company’s website or call (877) 606-LANE (5263).