Only two months before becoming the first guard drafted straight out of high school, a 17-year-old Kobe Bryant made a lasting impression at the 1996 Magic Johnson Roundball Classic. Held at The Palace at Auburn Hills, Kobe’s game featured an emphatic poster dunk over future NBA All-Star Jamaal Magloire. The Adidas t-shirt he wore in the second half, autographed by Kobe immediately after the game, will be up for auction in Lelands 2020 Spring Classic Auction.

Green Eyes Estate Sales in Royal Oak, Michigan has selected Lelands as their auction house of choice for this historic item – one of the earliest Kobe Bryant game-worn items ever featured in a public auction. The shirt sports an Adidas patch on the left shoulder and a beautiful Kobe Bryant full-name signature along with his high school number 33. The Adidas Equipment shirt comes with a letter of authenticity for the use, PSA COA for the signature, and the consignor’s ticket stub to the game. The shirt even has a sweat stain on the right sleeve.

Immediately after the game Bryant, who was swarmed by the media and interviewed by legendary color commentator Dick Vitale for ESPN2, can be seen still wearing the t-shirt. Shortly after that interview, the consignor managed to get face time with Kobe and asked him for his shoes. Kobe passed on giving up the kicks, and instead grabbed his Adidas t-shirt, signed it, and handed it to the consignor. 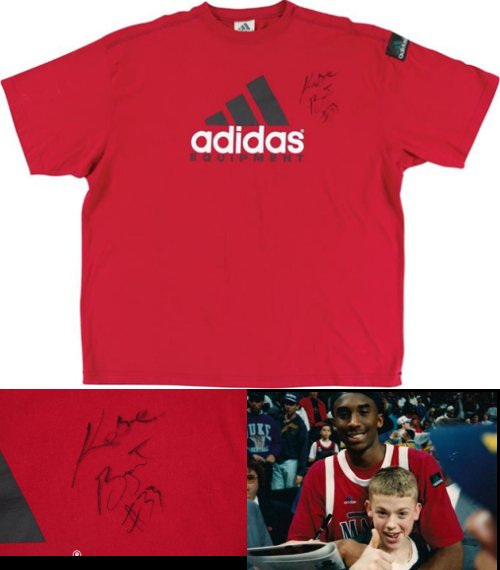 Generously, the consignor is earmarking 10% of the proceeds from the sale of the shirt for donation to the Mamba & Mambacita Sports Foundation, formerly known as the Mamba Foundation, a non-profit charitable organization founded by Kobe Bryant to make a positive impact through sports. The foundation’s name was recently renamed by Bryant’s widow Vanessa to honor their late daughter Gianna.

Lelands 2020 Spring Classic Auction closes on Friday night, June 19. The auction will also include numerous Kobe Bryant high-end autographed cards and photo-matched game-worn shoes. Now in their 4th decade, Lelands is the original sports memorabilia auction house and the most respected in the hobby.