The Topps Company redefined the trading card collecting hobby in the 1950s, and two of its most celebrated baseball sets from that first decade will tempt the most condition-conscious hobbyists at Heritage Auctions’ PSA Set Registry Auction in Dallas, which closes March 23.

The 1955 and 1958 Topps sets, which rank second and fourth, respectively, on the PSA Set Registry will be sold as individual single-card lots in the Extended Bidding format sale.

“It’s a lot of hard work to build a top-five set,” Heritage Sports Collectibles Director Chris Ivy said, “but the joy is in the journey, and this auction stays true to that principle.”

While set-builders are certain to play a leading role in the bidding, important rookie cards and Hall of Fame-condition rarities also will draw considerable attention from collectors who are interested only in elite singles. Debut cards from such baseball immortals as Brooklyn/Los Angeles Dodgers pitcher Sandy Koufax, Pittsburgh Pirates outfielder Roberto Clemente, Washington Senators/Minnesota Twins infielder Harmon Killebrew and New York Yankees outfielder Roger Maris are among the finest available, as is the famed 1958 Pancho Herrera error card, which was printed without the letter “a” on the end of the Philadelphia infielder’s surname.

Top projected lots in the PSA Set Registry Auction are expected to include, but are not limited to: 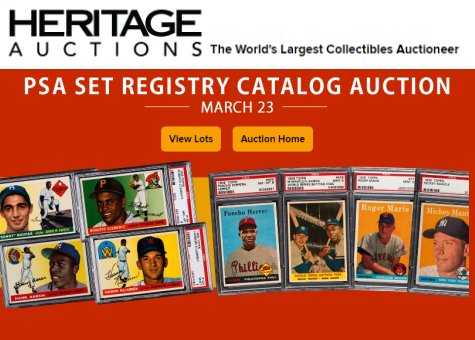