With Hall of Fame immortality assured as a first-ballot 2020 induction, Heritage Auctions looks back to the teenaged years of The Captain with two of the most significant Derek Jeter artifacts ever made available to the collecting public. Both will sell in Heritage Auctions’ “Yankee Legends” auction, now open for bidding at HA.com/7230.

Most significant is the original handwritten report from Yankees scout Dick Groch (est. $50,000+), who traveled to Kalamazoo High School on April 8, 1992 to evaluate a seventeen-year-old shortstop named Derek Jeter. Groch assigns numerical ratings to Jeter’s various skills and concludes his report with a remarkably prescient rave: “A Yankee! A five tool player. Will be a ML Star! +5!!” The report may sell for more than $50,000. 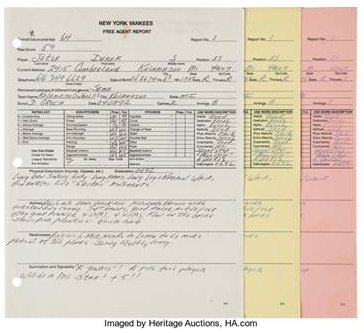 Also deriving from Groch’s personal collection is the very first baseball signed by Jeter (est. $5,000+) as a member of the team he would come to symbolize. The ball, signed in the youngster’s early autograph format at the 1992 Draft Day dinner banquet with a notation reading, “NY Yankees 1992,” was intended to be gifted to one of Jeter’s parents upon their son’s first appearance at Yankee Stadium–a team tradition–but the exchange was never made. The pre-auction estimate is $5,000+, but many experts believe this figure could be exceeded by a wide margin.

Bookending this remarkable early material is a pair of game used tools from The Captain’s final days in pinstripes. A fielder’s glove from his 2014 farewell season (est. $100,000+) is expected to command a six-figure sale price, and the bat with which Jeter clubbed his 260th and final career home run—as well as hits 3,452 through 3,255 (est. $40,000+).