The New York Yankees’ 2017 season ended in the seventh game of the American League Championship Series, but Heritage Auctions keeps the spirit of pinstriped competition alive with a special, single-consignor collection titled “Yankee Legends” which is now open for bidding at HA.com/7230. The special sale will close in extended bidding format Dec. 10. The consignor has chosen to remain anonymous but the figures represented in this extraordinary collection are immortalized in both Yankee Stadium’s Monument Park and further upstate in Cooperstown, New York.

“The consignor sees himself as a curator of Yankees history,” said Chris Ivy, director of Sports Collectibles at Heritage Auctions, “so the collection is remarkably comprehensive in scope and breadth, but with a heavy concentration on the most significant Yankee memorabilia available in the hobby.” 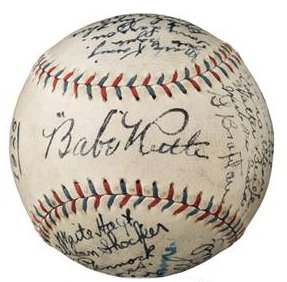 Autograph collectors will find a massive trove of Bronx treasures, with high-grade team balls from the mighty Murderer’s Row team of 1927 (est. $150,000+) and just about every other Championship vintage. Single-signed offerings run the gamut from the obscure to the immortal, including the only known example from Ernie “Tiny” Bonham (est. $3,000+) and one of the finest Babe Ruth exemplars on Earth (est. $150,000+).

Additional standout highlights include, but are not limited to:

The Yankee Legends auction is now open for bidding and will close in extended bidding format at 10 p.m. Central time, Dec. 10.