When the headliners are Mickey Mantle, Michael Jordan, John F. Kennedy and the Beatles, you know it’s a big-time event. That’s the case as the 2016 Goldin Auctions Holiday Auction offers more than 900-lots of sports, history and pop-culture memorabilia from these legendary figures and many more through December 3 at www.GoldinAuctions.com.

With just a few days left in the bidding, it’s not surprising that a rare piece of JFK assassination memorabilia and two of the hottest high-grade vintage trading cards have received the most attention from bidders. 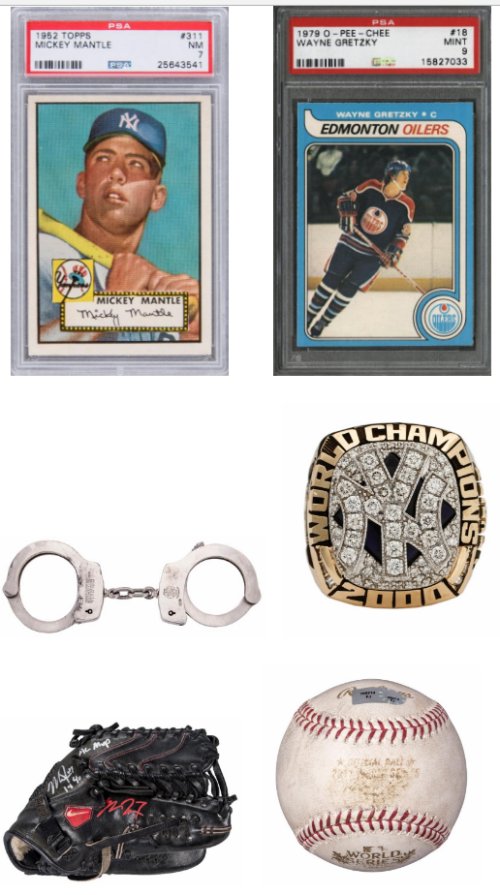 Here’s a look at some of the auction highlights and current bids as of Dec. 1 at 9:00 am ET.

Lot #2 – Lee Harvey Oswald Arrest Handcuffs – These handcuffs were used by officer Ray Hawkins to arrest Oswald in the Texas Theater on November 22, 1963. These handcuffs are one of the very few significant JFK-Oswald items that are not in the National Archives. Since the Dallas Police Department made its officers and detectives buy their own handcuffs, Hawkins retained his private property after the assassination. These Smith & Wesson cuffs, bearing the serial number “38468” were originally issued to Officer Hawkins when he joined the Dallas Police Department in 1953. Hawkins used these cuffs throughout his entire career and retained them after he left the force. The handcuffs are accompanied by a signed and notarized affidavit from Ray Hawkins describing his actions on November 22, 1963 and the role these handcuffs played in the capture of Oswald. (CURRENT BID: $75,000)

Lot #11 – 1964 Beatles Multi-Signed “Please Please Me” Album PSA/DNA Mint 9 – This original album is signed boldly by all four members of the Fab Four in blue ink. When all four signatures appear on an item, it’s typically a scrap of paper or a ticket stub. Having all four signatures on the back of an album is especially rare. (CURRENT BID: $20,000)

Lot #184 – 2000 Jim Leyritz NY Yankees World Series Ring – One of the more polarizing World Series heroes in Yankees history, this ring is from “The King’s” second stint in pinstripes. Comes in original presentation box and LOA from Leyritz. (CURRENT BID: $20,000)

Lot #3 – 2014 Mike Trout MVP Season Game Used and Signed Glove – This glove was used by Trout for his entire MVP season, the All-Star Game and his first career post-season game. Trout signed the glove on the back of its forefinger in bright silver marker with “14 G/U” and “AL MVP” inscriptions. Comes with an LOA from Trout and authentication from PSA/DNA and JSA. (CURRENT BID: $16,000)

Lot #4 – 1920 Tris Speaker Game Used Bat from Game 7 of the 1920 World Series PSA/DNA GU 8 – One of the game’s great players was the player-manager of the Cleveland Indians team that won the World Series over Brooklyn during a season in which teammate Ray Chapman was killed by a pitch. (CURRENT BID: $11,000)

Lot #12 – 2015 Aaron Rodgers Game Worn & Inscribed Jersey – Worn by the Packers great in a 27-17 win versus Seattle on 9/20/15 at Lambeau Field. The jersey is signed and inscribed with the score and his stats from the game which included 249 yards and two TD’s. Includes an LOA from Rodgers and Fanatics. (CURRENT BID: $10,000)

Lot #6 – 2005 Derek Jeter Game Used & Signed Glove from Gold Glove Season – One of the rarest items to come across from one of the most collected players. This Rawlings model PRODJ2 shows light game use with even wear in the pocket and web face, along with various light dirt and scuff marks and has been dated to the 2005 season, where he won one of his five Gold Glove Awards. The glove has been factory personalized with “Derek Jeter” embroidered in white on the outside of the thumb. Jeter has signed the ring finger in silver ink which contrasts nicely with the glove’s black leather. (CURRENT BID: $10,000)

Lot #10 – 2011 David Freese Game 6 Game-Tying Triple World Series Baseball – This is the ball Freeze hit for a triple in the bottom of the 9th in Game 6 over the head of Nelson Cruz versus Texas to force a Game 7. The story behind the ball is nearly as remarkable as the hit. MLB Authenticated & Mears. Click here to check it out. (CURRENT BID: $8,000)