Heritage Auctions will burnish its reputation as the leading purveyor of direct-from-the-source sports collectibles with its presentation of personal keepsakes from 1970’s sports icons Evel Knievel and Olga Korbut in its forthcoming Platinum Night auction, expected to add hundreds of thousands of dollars in receipts to a sale that will soar past $10 million. The Heritage Platinum Night auction, closing in Extended Bidding format on February 25-26, 2017, has become the most anticipated semi-annual sale in the sports collectibles community, featuring the most important and expensive relics in the hobby.

“Hobbyists have been waiting forty years for the chance to own Knievel and Korbut treasures,” said Chris Ivy, Director of Heritage Sports Collectibles. “We’re thrilled to be the venue to present them to the collecting world.”

Knievel captured the sporting world’s imagination through his daring motorcycle jumps and his unsuccessful attempt at crossing the Snake River Canyon in a custom-made rocket for a national television audience. He passed away in 2007, and his collection is consigned to auction by his family. Korbut captured the hearts of an international audience through her dominance in the 1972 Munich Olympics gymnastics competition, and her subsequent appearance in the Montreal Games four years later. Ms. Korbut consigned her collection personally, inclusive of five of her Olympic medals. 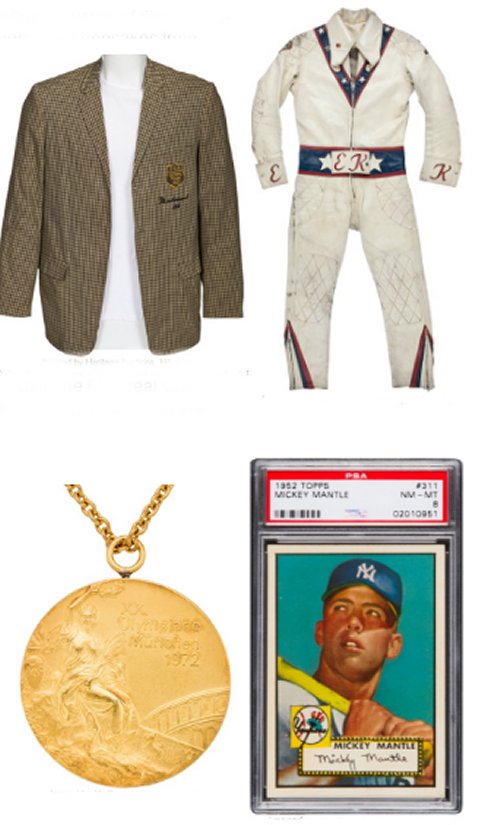 The balance of the sale features the typical array of top-end trading cards and memorabilia. Multiple high-grade examples of the most coveted post-war card of them all, the 1952 Topps Mickey Mantle, leads the charge. Also on offer are spectacular PSA Mint 9 rookie cards of Hall of Famers Jim Brown, Bart Starr and Satchel Paige. The finest T206 Cobb/Cobb Back to find its way to the hobby’s auction block will tempt the Tobacco Era enthusiast.

Highlights from the memorabilia offerings include the New York Yankees jersey worn by Mickey Mantle as he clubbed the penultimate home run of his career–number 535–after 1968 Cy Young Award-winning pitcher Denny McLain tipped his pitches as a parting gift to the retiring legend. And the only game used bat that has been definitively attributed to Ted Williams’ historic 1947 Triple Crown season will likewise tempt top collectors of game used gear.

One of two known examples of the massive tri-fold Piedmont Tobacco baseball advertising sign will serve as the first appearance of a complete example on the hobby’s auction block, discovered recently after a century’s seclusion in the wall of an old cigar shop. And two original LeRoy Neiman oil paintings will protect Heritage’s status as the leading source for the work of the leading figure of the sports art genre.