The Ruth game-used bat exhibits all of the proper characteristics to warrant the GU 9 grade by PSA/DNA, with scoring on the bat and handle as well as a defined contact area that are telltale signs of an authentic Ruth gamer. Along with the bat is a letter of provenance indicating that Ruth gave the bat to a clubhouse attendant after discovering a slight crack, saying that he hit three home runs with it. The Ty Cobb gamer is from the 1910-15 era and was used to help Cobb win the American League batting title (since he led the league in batting average in each of those six seasons), with the “dash-dot-dash” design, hand spun markings and close proximity of the facsimile Cobb signature to the center stamp confirming the time period. This amazing war club has earned a grade of GU 9.5 from PSA/DNA. Each bat is in remarkable condition and stand as true museum-quality pieces. 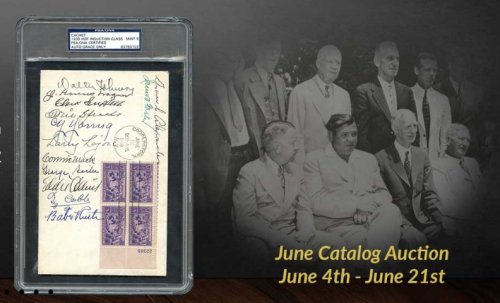 Mile High Card Company’s June auction will be offering some of the most spectacular single-signed baseballs seen in years, led by the finest known example of “The Christian Gentleman” Christy Mathewson. Other amazing baseballs highlighted in this event are among the very finest known examples of Ty Cobb (dated 1925), Walter Johnson, Tris Speaker and Connie Mack. The auction begins Monday, June 4th and concludes on Thursday, June 21st.

Signed in steel-tip fountain pen ink with a “yours truly” inscription on the side panel, the signature of Christy Mathewson is one of the boldest we’ve ever seen on any surface. The Official National League Spalding stamp is factory fresh and places the sphere somewhere in the 1915-1924 time range as identified by the markings; the twilight years of Mathewson’s storied career. The Cobb ball is equally as impressive, a wonderfully bold signature to the left of the OAL (Johnson) stamp and accompanied by the date June 24, 1925 while still playing for the Detroit Tigers. Similarly, the Walter Johnson ball is also one of the sharpest in existence with markings of the Reach stamp that set its origins between 1918 and 1924, the latter being when Johnson won his third and final pitcher’s Triple Crown. All three items, along with the Speaker and Mack signed balls, are double authenticated. 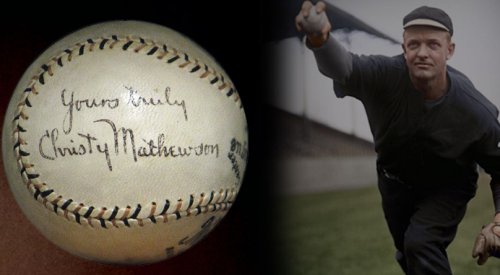 Mile High Card Company is accepting consignments for upcoming auctions and there’s still time to get your consignments in. If you desire the maximum possible return for your prized sports cards and/or memorabilia, please call our office at (303) 840-2784 to speak with one of our team of experts, contact us at www.milehighcardco.com.