When it comes to collecting autographs, it’s never easy finding documents previously signed by the dearly departed. Unless, of course, you have enough disposable income and can pay top dollar when these rarities come up for auction. Or, better yet, you were astute enough to land their scrawls before they exited this world. Such is the case for autograph collectors chasing the scarce signature of late Apple Computer co-founder and iPhone visionary Steve Jobs, who passed away in 2011 following a lengthy battle with pancreatic cancer. He was 56 years old.

Next month, an online “Pop Culture” auction will bring three never-before-offered Jobs’ signatures to market. On Thursday, March 8, Boston-based RR Auction will start accepting bids on the trio of unique autographs signed by the man who was – by most accounts – an unwilling signer. Bidding concludes March 15. Landing each of the signatures was an adventure for the three different consignors, all of whom had their precious Jobs’ autographs verified by the industry’s No. 1 third-party authenticator, PSA/DNA (www.PSADNA.com). RR Auction’s online preview of the fast-approaching Pop Culture auction went live last week at www.rrauction.com.

“Identifying Jobs as a reluctant signer is a major understatement,” said Steve Sloan, vice president of PSA/DNA. “And for us to be able to authenticate three of his signatures inside of a month is truly a rarity.” 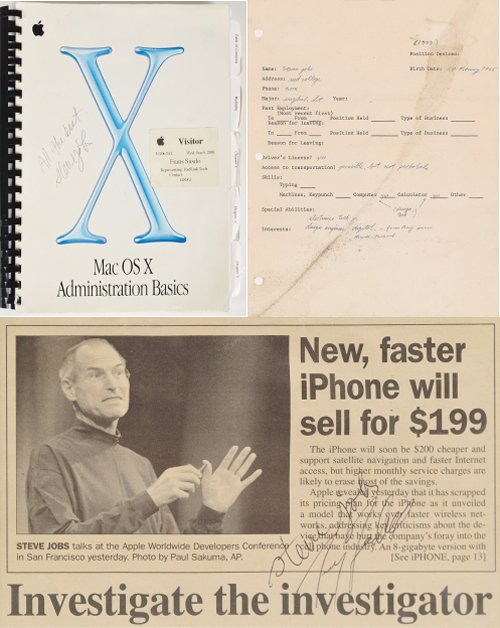 Jobs could marry creativity with science. A temperamental mastermind who demanded ridiculous deadlines from colleagues, he left an indelible imprint on the world before his premature demise. He was feared and despised nearly as much as he was admired and revered. The man who unveiled the iPhone to the world in 2007 was, quite simply, a genius. This coming Saturday would have marked his 63rd birthday.

Just like great inventors before him, from Thomas Edison and Benjamin Franklin to Alexander Graham Bell and Henry Ford, his signature in death is a prized commodity that commands big bucks. For example, in a previous auction conducted by RR Auction last October, a Jobs’ signed and inscribed (“I love manufacturing”) 1988 Newsweek magazine cover sold for a whopping $50,587.

The three autographed pieces going up for bid include a 1973 job application filled out and signed by a then-18-year-old Jobs seeking employment as an “electronics tech or design engineer” (starting bid: $5,000, estimate $50,000-plus); a Mac OS X Administration Basics technical manual signed by Jobs in the Apple Inc. parking lot in 2001 (starting bid $1,000, estimated to sell for $25,000-plus); and a newspaper article that appeared in the June 10, 2008, edition of the Palo Alto Daily Post covering the annual Apple Worldwide Developers Conference in San Francisco. It includes a photo of Jobs speaking at the conference with a headline reading “New, Faster iPhone will sell for $199” (starting bid: $2,500, estimate $15,000-plus).

Today’s autograph market will likely yield and perhaps surpass these early estimates regarding Jobs. Such is the power of scarce, sought-after signatures with the backing of PSA/DNA.

Kevin Keating, PSA/DNA’s lead authenticator, had this to say after evaluating the three Jobs’ autographs: “Steve Jobs’ signature is remarkably simple when one considers his brilliance and creativity, and his simple-style cursive does match well with the simplifications that marked many of his innovations as it related to making computers and devices user-friendly.

“There is nothing, however, structurally significant or creative about his signature which remained quite consistent during his adult life. Like other autographs, the value [of his] is largely a direct product of available supply versus demand. As a habit, Jobs did not sign autographs, thus the enormously small number of authentic items that are now in circulation. There appears to be no end to the increasing interest in Jobs, which will continue to drive interest in his autograph and make his name a good autograph investment for the foreseeable future. For now, the high prices realized at auction are helping to draw out more material, but those same prices almost certainly will elicit more fraudulent attempts by unscrupulous individuals trying to score with forgery attempts. For every real Jobs’ [autograph] we see, we continue to see a number of fakes.”