A record-breaking $1.4 million worth of rare animation art, concept drawings and poster art changed hands in Heritage Auctions’ Animation Art Auction July 1-2 in Dallas. The event featured a grand selection of original Fantasia artwork, and the leader of the famed Disney musical feature was Kay Nielsen’s depiction of the demon Chernabog in the Night on Bald Mountain Concept Painting, which sold for an astounding $59,750.

“This was our sixth consecutive Animation auction to top the $1 million mark,” said Jim Lentz, Director of Animation Art for Heritage. “Our formula has been to auction primarily fresh material that never had been offered for sale before, with almost no reserves, and to cross-promote it to a new generation of bidders as well as seasoned animation collectors. We plan to continue in this vein and also to continue emphasizing the whole range of animation from 1928-2000.”

A beautiful Snow White and the Seven Dwarfs Old Hag and Snow White Production Cel exceeded expectations by closing $33,460, solidifying the fact that the cel was “no ordinary apple.” Also, a museum-worthy storyboard sequence from Song of the South appeared and its 23 pages of concept art from the “Tar Baby” scene by illustrator Ken Anderson sold for $15,535. Concept art from the classic by Mary Blair featuring Br’er Bear and Br’er Fox Concept Art (Walt Disney, 1946) sold for $10,157. 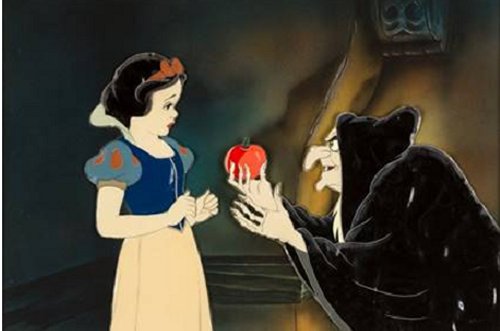 A lavish selection of Lady and the Tramp original artwork was offered, and some of the highlights included an alluring Production Cel Setup and Master Background that realized $14,340, a Production Cel Setup from the memorable “Bella Notte” scene received $11,950 and a Concept Art/Background Color Key by Eyvind Earle was auctioned for $6,572.50.

Additional animation and collectibles highlights included, but were not limited to:

A gem from the Saturday morning cartoon arsenal of artwork Filmation’s The Adventures of Batman Publicity Cel and Painted Coconut came out on top, realizing $6,572. This cel was special because it was actually displayed in Filmation Studios’ offices for many years.

A rare, Rocky and His Friends Production Cel and Key Master Background realized $16,730.

An extraordinarily rare Dr. Seuss’ How the Grinch Stole Christmas Production Cel Setup and Master Background (MGM, 1966) – depicting the dastardly Grinch speeding away from Whoville on a sled packed with presents – sold for nearly three times its estimate to end at $6,572.

One of the first depictions of Mighty Mouse as “Super Mouse”– desired for being the first time art from the early cartoon was ever offered at auction – sold for $5,019. Also bringing $5,019 was a Production Cel and Master Painted Background Setup from the famous Tom and Jerry short “A Mouse in the House.”

Fans of Disneyland were treated to The Haunted House/Haunted Mansion Disneyland Notes and Plans group that are straight from the hands of Walt Disney and Ken Anderson, a longtime writer and art director at Walt Disney Animation Studios. These binder-bound notes went for $13,145 after a fierce battle among 13 bidders.