The Goldin Auctions 2016 Premium Live Auction features a mix high-grade trading cards and one-of-a-kind items from legendary sports figures including Knute Rockne, Muhammad Ali, Babe Ruth, Mickey Mantle and more. The live auction,which features 100 lots of rare memorabilia, each valued at $10,000 or above will conclude on August 4 at the National Sports Collectors Convention in Atlantic City, while a corresponding catalog auction with more than 1,000 additional lots will run through August 13 online at www.GoldinAuctions.com.

Auction features 100 lots valued at $10,000 or above at the National Sports Collectors Convention in Atlantic City on August 4 and online at www.GoldinAuctions.com through August 13 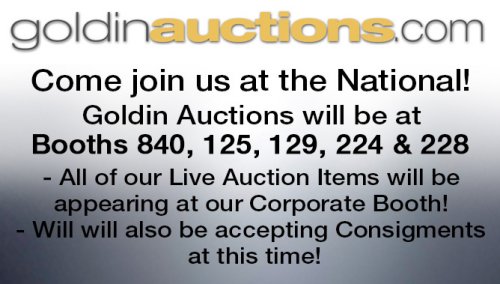 We have a limited number of phone lines available for reservation, so contact us today to ensure your reserved line. The ability to reserve a line will be reviewed strictly on a first-come, first-serve basis. To take advantage of this exclusive offer, call us at (856) 767-8550 or email us at info@goldinauctions.com prior to Tuesday, August 2nd @ 4pm Eastern.

Reserved lines are subject to being filled for your particular lots, therefore we ask you to put in your request as early as possible to guarantee your reserved line.

How to bid during the ‘Live’ Auction

Online Pre Bidding (recommended)
All bidders can register and log in to our website at www.goldinauctions.com. Once you are logged in, bids can be placed on any live auction lots as well as any of our internet/catalog lots. You can place a straight bid or a maximum bid. A maximum bid will allow our automated system to keep bidding in increments until the lot has reached your maximum bid amount at which point an email will be sent to you informing you that you have been outbid. We suggest using the maximum bid method, especially during our live auction. This will ensure your maximum bid will be placed for any ‘live’ lots and as a bidder you will not have to be concerned with the live action. Please note that online pre bidding will end 1 pm Eastern Thursday, August 4th (10 am Pacific). All high bids after pre bidding closes will be the minimum bid once the live event opens at 7:30 pm Eastern Thursday, August 4th, 2016. If there are zero new bids on a lot during the live auction,
the highest pre bid will be declared the winner.

To access the live streaming please log into your account at www.goldinauctions.com 30 minutes prior to the live event start.
Click ‘current auction’ on the Home Page and once there, a ‘Live Auction’ icon at the top of the page will appear asking you to join the live auction. Once you click on the ‘Live Auction’ icon, a second window will appear with live streaming of the auctioneer and current auction results.

Absentee/ Phone Bidding
Telephone Bidding: Bidders may participate in the live event over the telephone with a Goldin Auctions representative. Please contact Goldin Auctions at (856) 767-8550 or info@goldinauctions.com to provide a list of lot numbers you would like to bid on and at least two phone numbers where you can be reached during the bidding process. Goldin Auctions cannot guarantee the availability of phone lines for reservations made after 8/2/16. If you cannot attend our live auction in person or online, we highly suggest you take advantage of this service.

Attending the Live Auction
If you wish to attend the live event please contact us as soon as possible. Space is extremely limited and by invitation only. In order to attend the live auction you must be approved for a minimum of $25,000 in credit with our company. Please call (856) 767-8550 to ask for a raise in your credit limit.

All starting bids for the live event will begin at the highest pre bid amount recorded as of Thursday, 8/4/16 1pm Eastern 10am Pacific.

Auctioneer may occasionally experience internet or service outages and may periodically schedule system maintenance and other purposes, during which bidders cannot participate or place bids. If such outages occur, we may at our discretion extend bidding for the auction. Bidders unable to place bids through the internet should contact our offices at (856) 767-8550 or info@goldinauctions.com.

For more information about the Live Auction Event please click here to view the Live Rules for the auction.

“The National Sports Collector’s Convention is the biggest event in the sports memorabilia industry and our annual auction has become the place for serious collectors to bid upon some of the most unique and valuable sports memorabilia,” said Ken Goldin, Founder of Goldin Auctions. “We are especially proud of the items we are offering this year, as many are reaching the auction block for the first time. It will be exciting to see the response and feel the energy in the room as record prices are set.” 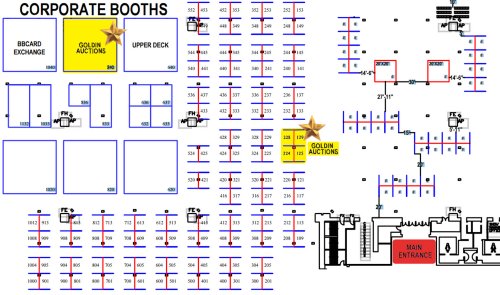