An American flag believed to be the first planted when Allied forces stormed Omaha Beach in 1944 is being offered in Heritage Auctions’ Arms & Armor, Civil War & Militaria auction June 9 in Dallas, Texas.

D-Day: First American Flag Planted on Normandy Beachhead with August 1944 Newspaper Documentation (opening bid: $25,000) was planted on the busiest beach on of those on the northern coast of France that were stormed by Allied forces by First Sergeant John E. Horvath. A bartender-turned-Army engineer, most likely a member of the 121st Combat Engineer Battalion, attached to the 29thInfantry Division of V Corps (the moniker given to the Fifth Corp of the Army), Horvath appeared in a newspaper clipping (believed to be from The Columbus Citizen-Journal) entitled “First Flag on Beachhead in Normandy Arrives Here as Souvenir of Battle.” The article includes a photo of Horvath’s wife with the flag, and quotes a letter he had placed inside a package that she had received just days earlier: “Take care of the flag. It’s the first one which went up on the beachhead, two hours after the invasion started. I had to use my tent pole to raise it.” 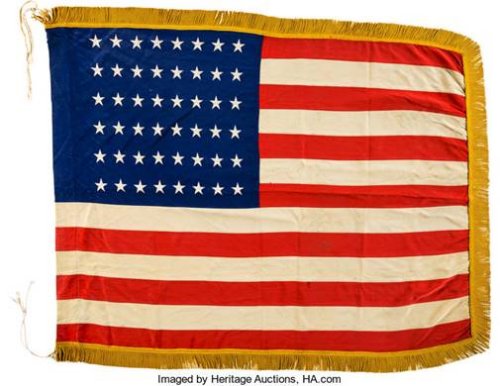 “This is a once-in-a-lifetime opportunity for a collector to acquire one of the most famous flags in U.S. history,” Heritage Auctions Arms & Armor Consignment Director David Carde said. “The Allied invasion at Normandy is one of the most famous military confrontations of all time, one that has been recounted in history books and in movies. Considering the significance of that invasion in World War II, it is impossible to overstate the significance of this flag.”

Flags are definitive national symbols, and military flags have long produced top prices among collectors. The battle-scarred banner measures approximately 32-1/2 inches by 43 inches, with 48 embroidered stars. The flag’s distinctive appearance allows for a definitive match to the newspaper image of Horvath’s wife posing with it, and to a different photograph from the same shoot, which also is included. The lot also contains the aforementioned dog tags, Horvath’s Purple Heart and Good Conduct medal, and various ribbons as follows: Presidential Unit Citation, WWII Victory, and a Purple Heart/Good Conduct/European Theater ribbon bearing four Bronze Stars and an Arrowhead Device.

A Union Corporal’s Forage Cap & Frock Coat Set Id’D to Corp. George Schmultz (opening bid: $15,500) was pictured on pages 20-21 in The Illustrated History of American Civil War Relics (1978) by Stephen W. Sylvia and Michael J. O’Donnell, one of the earliest reference books for Civil War collectors.  Schmultz enlisted in February 1864 as a Corporal and served for nearly two years. The cap includes its original brass lettering denoting Schmultz’s unit with a “G” over “188” over “PV” – which stand for “Co. G, 188th Pennsylvania Volunteers.” The cap, which retains all original insignia, also includes an “18th Corps” badge. Schmultz’s enlisted frock coat is a rare top-of-the-line rarity with original corporal’s chevrons and brass shoulder scales.

A Rare Winchester Single “W” Model 1890 Cartridge Board (opening bid: $12,500), housed in a golden oak frame, features all of the original bullets and cartridges sold by Winchester. One of the less common variations on the “Single W” design, with geese in the center, Indian hunters to the left and a cowboy taking position beside his horse on the right.

An Engraved London Boss & Co. Double Barrel Shotgun (opening bid: $12,500), Serial No. 6996, is a 12-guard with 28-inch blued barrels with a fixed front beat sight, and it features a finely checkered walnut straight stock and splinter fore-end. The elaborately scroll-engraved case-hardened receiver is marked “BOSS & CO.” Boss & Co. was founded in 1812 by Thomas Boss, who apprenticed under his gunmaker father, William, from 1804-12 and later established himself as an independent gun maker who has produced some of the world’s finest shotguns and rifles. The company’s firearms are in such high demand that orders have led to a waiting period of as long as three years.

An Important Relief Carved Pre-Revolutionary War Flintlock Kentucky Rifle by John Philip Beck (opening bid: $10,000) is a rare 18th-century American rifle. Approximately .57-caliber, it includes a 47-1/4-inch octagonal to round barrel (the top of which is signed J P BECK) that stretches the overall length to 63-1/2 inches. A classic full-stock maple design, it features a unique single-set trigger and an early flat lock with vertical rear flutes. The rifle, by the maker whose work appears in numerous books between 1750 and 1850 about Kentucky rifles, also appears in Rifles of Colonial America and in Kentucky Rifles & Pistols 1750-1850. George Shumway, the author of Kentucky Rifles & Pistols 1750-1850, called it “one of the earliest, if not the earliest, surviving examples of (Beck’s) work.”

A Cased Italian Perazzi Ultra Gold Over & Under Shotgun (opening bid: $10,000), with serial No. 110922 is a 28-gauge weapon with 28-1/2-inch blued barrels with ventilated rib and white dot beat sights. It includes an extraordinary scroll, floral and fowl scene engraved on the coin-finished receiver, with the fowl accented in gilt.

A Cased Holland & Holland “THE ROYAL” Double Barrel Shotgun (opening bid: $10,000), with serial No. 12021, is a 12-gauge shotgun with blued and case-hardened 30-inch barrels with a fixed front bead sight. Each side of the receiver is marked “HOLLAND & HOLLAND.” The base of the receiver is marked “THE ROYAL” / – PATENT SAFETY- / HAMMERLESS EJECTOR. The gun features dual triggers, a finely checkered walnut straight stock and splinter fore-end, and is housed in a leather factory carrying case with red felt lining and cleaning tools. All H&H guns are built per individual special order.

The sale features nine lots from the estate of legendary actress, singer and dancer Shirley Temple Black, including a Rare Captured Japanese Used Geweer M. 95 (Dutch Mannlicher) Bolt Action Rifle, Leather Sling and Bayonet With Army Officers’ Shin-Guntō (opening bid: $500), which were captured by her husband, Lt. Charles A. Black, whose efforts earned him the Silver Star from the U.S. Navy.

Other lots from the Shirley Temple Black estate include, but are not limited to:

Collectors will have an opportunity to bid on 19 lots from the militaria collection of J.T. Hamrick, including:

The auction is the second presented by Heritage Auctions that will benefit the J.M. Davis Arms & Historical Museum based in Claremore, Oklahoma.

“We are excited to be offering another installment of J.M. Davis Museum guns,” Carde said. “The first auction that benefitted the museum was a huge success, and the lots included in this sale should yield similar, or even better, results.”

* No Floor or Phone Bidding*