The first card graded by Certified Sports Guaranty™ (CSG™) has sold for an incredible $98,100 in a flash auction by PWCC on eBay that ended March 11, 2021.  The #111 LeBron James rookie card from the 2003-04 Topps Chrome Refractor set is graded CSG 9.5, with sub-grades of 9 for Centering, 9.5 for Corners, 10 for Edges and 9.5 for Surface. The CSG certification label features the significant pedigree of “First Card Graded.”

Topps included the LeBron James rookie card in just one out of every 12 packs in a 165-card set, which means the chances of pulling the card were just one in 1,980. Because of its rarity and James’ ever-growing list of accomplishments, many analysts expect the card’s value to continue to rise.

The front of the Topps card features James firing a jump shot over the Detroit Piston’s Ben Wallace. It is coated in a reflective surface that interacts with light and shines back a multitude of colors. 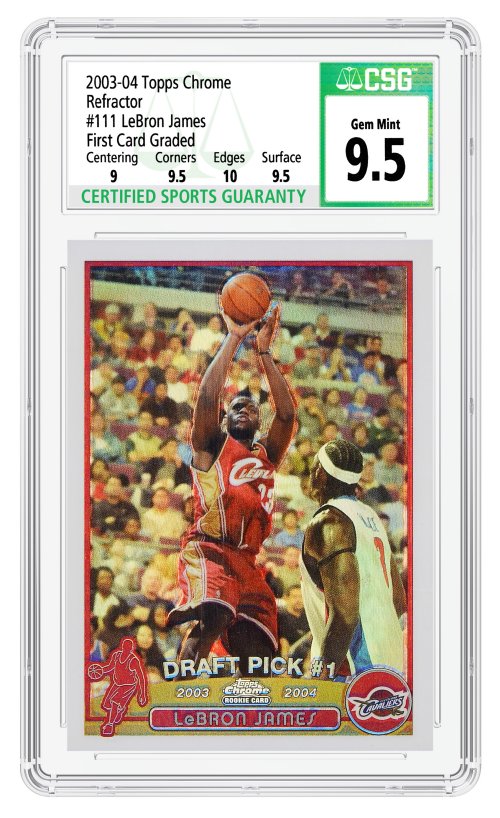 “This is already one of the greatest basketball cards of all time, and LeBron has a lot left in the tank,” said Westin Reeves, CSG Lead Modern Sports Card Grader. “When you factor in the booming sports card market and CSG’s expert certification services, it is no surprise that this card was a slam dunk at auction.”

LeBron James started playing professional basketball when he was just 19 years old. The Cleveland Cavaliers selected him as the first overall pick of the 2003 NBA draft, and he was named Rookie of the Year for the 2003-2004 season. Now considered one of the greatest players of all time, James has since made eight consecutive appearances in the NBA Finals, won four NBA championships, four MVP Awards and two Olympic gold medals.

CSG’s own rookie season just tipped off in February, when it began to accept submissions. Building on the success of its affiliates within the Certified Collectibles Group® (CCG®), CSG has already begun to revolutionize sports card grading with its world-class expertise, advanced technology, innovation and operational excellence.

“We are thrilled by the strong demand for CSG’s authentication and grading, which is backed by the industry-leading CSG Guarantee,” said Mark Salzberg, Chairman of CCG. “The extraordinary price realized by this card reflects the high regard that collectors and dealers have for CSG’s best-in-class services.”

CSG is an expert and impartial authentication, grading and encapsulation service for sports cards. It is the latest company formed by the Certified Collectibles Group® (CCG®), the world’s leading provider of services that add value and liquidity to collectibles. More than any other third-party sports card grading service, CSG uses advanced authentication and grading technology to make the certification process more precise and efficient. After a card has been certified by CSG, it is encapsulated in a display-worthy holder that provides superior long-term protection. CSG also offers the industry’s strongest guarantee, which adds significant confidence, liquidity and value to the hobby. To learn more, visit CSGcards.com.