Offered is the very first 1/1 autograph card of Michael Jordan. This iconic Upper Deck card encapsulates Jordan’s Historic Last Shot of 1998.  The rare 1999-00 Upper Deck Final Floor Michael Jordan 1/1 card is currently on offer in the Goldin May Elite Auction. This historic card is the very first Michael Jordan 1/1 autographed card ever made. The card is graded at a 10 autograph PSA (Professional Sports Authenticator), 6 EX-MT (Excellent-Mint) with a Population 1 of 1 with none in the world graded higher.

Michael Jordan, often regarded as the greatest athlete of all time, with poetry-in-motion game-filled electrifying plays, dominating in many statistical categories, 6 rings in 6 finals appearances, 10 scoring titles, 5 most valuable players, with the last shot story-book ending to his perfect career. A moment often quoted as the clutchest moment in sports. Jordan’s influence extends beyond generations through his legacy and brand. The Last Dance documentary series further enhances his popularity and status during the social media age. His top sports cards and game memorabilia are extremely coveted among hardcore collectors and ascend to prime asset class levels in investor and institutional portfolios.

Michael Jordan, autograph, and 1/1 are three sweet terms in the world of basketball collectors and investors. With the addition of a floor relic from MJ’s final game with the Bulls where the last shot happened, you have an unbeatable combo, with immense appeal and upside. This iconic card encapsulates MJ’s historic last shot. The autograph is in perfect shape without skip and the floor is immaculate without cracks. 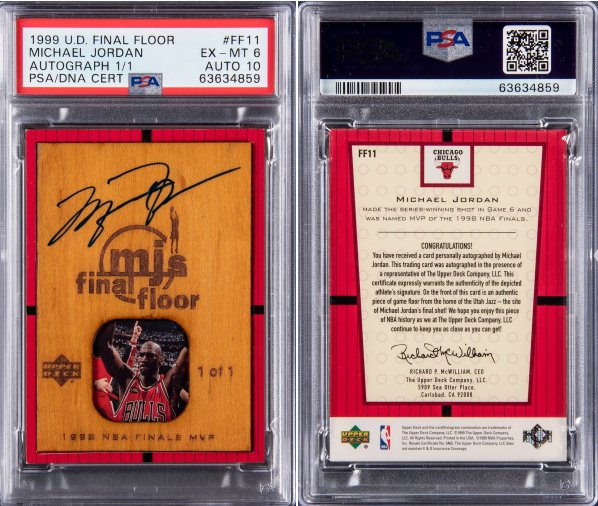 Upper Deck competed with Fleer/Skybox’s creative parallel and insert game plan using its game-used autograph elements during the 90s era. At the turn of the century, Upper Deck gradually overtook market share and this historically significant release with artistic execution played an important role. This Final Floor 1/1 auto is highly regarded in the collecting community as one of the top 2 Jordan auto cards ever made, together with the comparable first game jersey auto in 1997 GJ13S. The latter has a 23 print run and is depicted in an all-star jersey. Notably, this Final Floor 1/1 auto card is arguably MJ’s best Bulls autograph sports card.

The Goldin May Elite Auction is live and ends on May 21. Chairman and founder Ken Goldin emphasized, “This historical card is the first ever 1/1 autograph card put out by Upper Deck. That alone makes it historically significant. The card features Jordan during the historic Last Shot Game 6 of the 1998 NBA Finals to win the game. The last dance, running off the floor, victorious, Jordan knew this was the last game he would ever play in the NBA, at least for the Chicago Bulls. What makes this card unique is that it is the first 1/1 ever for autographs of Jordan, and it’s the largest piece of memorabilia ever issued by any card manufacturer on a Michael Jordan pack-pulled trading card. The photo and the event are the pinnacle of Jordan’s career.”

About Goldin Auction:
Goldin is the leading collectibles marketplace. Founder Ken Goldin has sold more than $1.5 billion in memorabilia from many of the biggest names in sports, history, and pop culture. The company routinely sets records for the most expensive trading cards and other memorabilia ever sold. Lifelong collectors and new hobbyists alike trust Goldin because the company professionally authenticates everything it sells. Goldin is the official auction partner of the Naismith Memorial Basketball Hall of Fame, The Major League Baseball Players Alumni Association, The Jackie Robinson Foundation, and the Babe Ruth Birthplace and Museum. Learn more at goldin.co, and on Twitter, YouTube and Instagram.