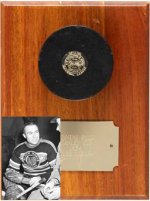 and two famous goals come to mind: First, his historic overtime goal in game four of the 1934 Stanley Cup – a laser shot out of a face-off that secured the win and was the first overtime goal to ever decide a championship – and the first ever goal scored in Toronto’s famous Maple Leaf Gardens Stadium, which forever gave Blackhawk fans bragging rights over Leafs fans. Now those two famous pucks, along with March’s 1935/36 Blackhawks jersey and 1934 Blackhawks jacket, will form the centerpiece of the hockey offerings in Heritage Auction Galleries’ October 2009 Vintage Sports Memorabilia auction, Oct. 1-2, in Dallas. The trove comes with unimpeachable provenance, having been consigned by March’s son, Harold, Jr.

“For NHL fans in general, and Blackhawk fans in particular, this really does represent a once-in-a-lifetime opportunity,” said Chris Ivy, Director of Sports at Heritage. “These pucks are key pieces of both hockey history and the storied Chicago Blackhawks franchise.”

March was a scrappy winger, known for his diminutive size, his fearless play and his fidelity to Chicago. He is one of the few players of the era to spend his entire career with the same team, all 17 years of it, a mark only topped by Dit Clapper, the revered 20-year Boston Bruins defenseman. He was not known as the greatest scoring threat, but he certainly had a penchant for scoring important and timely goals, namely the 1934 Stanley Cup OT winner.

March described his most famous goal in John Devaney and Burt Goldblatt’s 1975 book The Stanley Cup, A Complete Pictorial History:

“Well on that goal that won the series, they had a face-off,” March related. “I shot it and it went through Cude’s legs (Wilf Cude, the Detroit goaler who later starred with the Montreal Canadiens) and into the net. I didn’t realize it at the second, you know, that we’d won the Stanley Cup, but it was great. I rushed in and got the puck and then the fellows grabbed me and wheeled me on their shoulders all the way around the rink. It was nice to see my name on it for the first time. It’s always nice to be a champion.”

“We’re very excited to be the first ones to offer Marsh’s famous pucks to collectors,” said Ivy. “He was a great player and a crucial figure in two Blackhawk Stanley Cup titles, as well as several great moments besides the two these pucks represent, and we fully expect Chicago fans who bleed red and black to recognize how important this memorabilia is.”

Heritage Auction Galleries is the world’s third largest auction house, and by far the largest auctioneer of rare collectibles, with annual sales more than $700 million, and 450,000+ registered online bidder members. For more information about Heritage’s auctions, and to join and gain access to a complete record of prices realized, along with full-color, enlargeable photos of each lot, please visit www.HA.com.

Want to get the up-to-the-minute updates and breaking news stories about Heritage? Get them as they happen at: www.Twitter.com/HeritagePress; www.Twitter.com/JimHalperin; Facebook: Heritage Auction Galleries. To view a compete archive of Heritage press releases go to: www.HA.com/PR. To link to this press release on your blog or Website: www.ha.com/PR-1725.