A flurry of competitive bidding boosted the result for D-Day: First American Flag Planted on Normandy Beachhead with August 1944 Newspaper Documentation to more than three times its pre-auction estimate. It was planted by First Sergeant John E. Horvath when thousands of Allied forces stormed the beach in Normandy. The flag was sold along with a copy of a newspaper article in which Horvath’s wife is pictured after she received the flag from her husband. 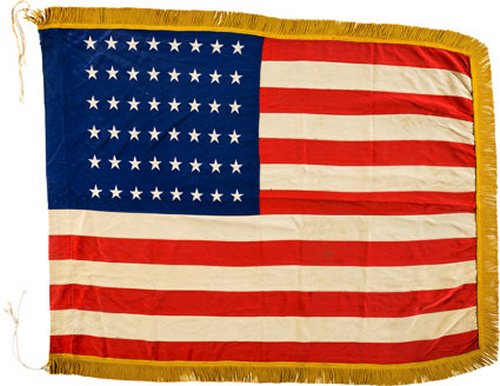 “This is among the most significant and important flags in U.S. history,” Heritage Auctions Arms & Armor Consignment Director David Carde said. “Flags are, by definition, symbols of national and military pride. The invasion at Normandy is among the most famous conflicts in American military history, making this as important as any in the country’s history.”

Engraved London Boss & Co. Double Barrel Shotgun is a 12-gauge with blued 28-inch barrels and a fixed front bead sight that realized $22,500. It features a finely checkered walnut straight stock and splinter fore-end, and the elaborately scroll-engraved case-hardened receiver is marked “BOSS & CO.” Firearms from Boss & Co. are in such high demand that orders from the company have led to a waiting period of as long as three years.

Multiple bidders pursued an Important Relief Carved Pre-Revolutionary War Flintlock Kentucky Rifle by John Philip Beck until it closed at $19,375. The rare 18th-century American rifle is approximately .57-caliber and includes a 47-1/4-inch octagonal to round barrel (the top of which is signed J P BECK) that stretches the overall length to 63-1/2 inches. Created in a full-stock maple design, it features a single-set trigger and an early flat lock with vertical flutes. George Shumway, the author of Kentucky Rifles & Pistols 1750-1850, called it “one of the earliest, if not the earliest, surviving examples of (Beck’s) work.”

A Cased Pair of Kemen Double Barrel Shotguns drew multiple bids before finishing at $19,375. The 20-gauge weapons feature 30-inch blued barrels with ventilated ribs and fixed white bead sights. The triggerguards, each bearing the initials “E/K,” are accented in gilt. They have finely checkered walnut pistolgrip stocks and fore-ends, and were accompanied by a fitted hard carrying case with green felt lining and cleaning tools.

Cased and Engraved Armi Perazzi Over and Under Shotgun Set: $16,250

Excellent Cased and Engraved Perazzi Mirage Over and Under Shotgun: $16,250