A film that was made with the hope of creating a successful war drama only to evolve into a beloved classic is represented beautifully in this Casablanca (Warner Brothers, 1947) First Post-War French Release Double Grande, which drew multiple bids before ultimately selling for $143,400. This poster is extraordinarily rare, one of just two known to exist anywhere, and features artwork believed to have been done by Hervé Morvan, the popular 20th-century poster artist.

“This auction contained a variety of desirable posters for collectors of all tastes,” Heritage Auctions Vintage Posters Director Grey Smith said. “The Casablanca poster is a beautiful poster that drew the attention of our most serious collectors.” 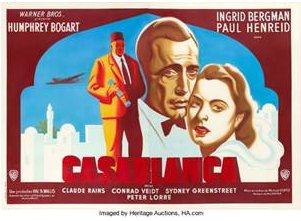 One of the most actively pursued lots in the auction was a Superman (Columbia, 1948) Six Sheet, which realized $35,850. The first comic book superhero made it to the big screen in a live-action format 10 years after he first was introduced in Action Comics #1. This poster also is exceptionally rare – one of just two of this large format known to exist.

The poster from The Lady Eve (Paramount, 1941) One Sheet is exceedingly rare, which helped spark demand from multiple bidders before it eventually brought $33,460. This classic Preston Sturges comedy is considered one of his best.

Believed to be the only known copy in existence, Morocco (Paramount, 1931) French Horizontal Double Grande validated its rarity when it passed its high pre-auction estimate on its way to a final sale price of $31,070. This extraordinary French stone lithograph from Josef von Sternberg’s classic drama bears a magnificent image for a magnificent film. Roger Soubie’s depiction of the sultry Marlene Dietrich is considered one of the best illustrations ever painted of the star.

Offered for the first time through Heritage Auctions, Adventures of Captain Marvel (Republic, 1941). One Sheet Chapter 1—“Curse of the Scorpion” is another that sparked significant competition among bidders before ultimately yielding $31,070. This poster is one of only a small handful still known to exist from what many consider to be one of the greatest serials produced.