A trio of extraordinary flags and banners sparked a flurry of competitive bidding, boosting the final total from Heritage Auctions’ David and Janice Frent Collection of Presidential & Political Americana, Part 3 auction to $1,152,076, exceeding the pre-auction estimate by nearly 20 percent.

This auction was the third presented in the last year by Heritage Auctions featuring portions of the Frent collection. Each has exceeded its pre-auction estimate, and the three have produced a combined total of $3,274,023. Additional portions of the Frent Collection are scheduled to be included in at least four more auctions.

“Helping to put together the Frent collection has been one of the highlights of my career,” Heritage Auctions Americana Auctions Director Tom Slater said. “What they have been able to assemble is nothing short of extraordinary, which is why so many of the lots in this auction were pursued so vigorously.”

A William Henry Harrison: A Spectacular Large 1840 Silk Campaign Flag nearly tripled its pre-auction estimate when it sold for $87,500. As stunningly beautiful as any political flag of the era, the deep, rich colors offer a perfect background for the large centered image of the country’s ninth president. Part of the appeal to collectors is the fact that silk flags are particularly prone to condition issues, yet this one endured over the years in near-mint condition. 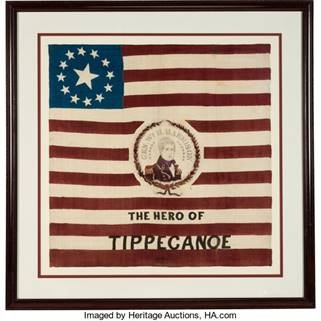 Another lot that nearly tripled its pre-auction estimate was a Van Buren & Johnson: The Very First Jugate Political Poster, which brought $56,250. A full-page feature in Running for President, 1789-1896, which was engraved and published by E. Durham in New York, this poster features the jugate portraits of the 1840 Democratic candidates, presidential hopeful Martin Van Buren and vice president candidate Richard Johnson, along with an eagle carrying a banner that reads “Liberty and Equality.” The photos of the candidates are positioned above their biographies, as well as detailed illustrations of Johnson at the Battle of the Thames and the Battle of Horse Shoe Bend.

A favorite among collectors is a Lincoln & Hamlin: Sought-after 1860 Campaign Flag Banner, which realized $31,250. In high demand among serious collectors of 19th-century political display items, the allure in this flag is due in part to the fact that Lincoln’s first name is spelled “Abram.”

A George Washington: Outstanding “Plain Roman GW” Inaugural Button, Possibly the Finest Example Known drew multiple bids until it closed at $21,250. A beautiful example of an elusive pattern, this button often is found in much lower grades, but the absence of wear, in addition to the gloss and patina and the original shank, make the condition of this example extremely rare. This button was acquired directly from Dewey Albert at the 1976 A.P.I.C. convention in Hartford, Connecticut. So pristine is the condition that Albert later added the notation “Best specimen known” by its image in his book on military and historical buttons.

One of the largest varieties of political flags ever produced, a Henry Clay: Spectacular Large 50” 1844 Campaign Flag Banner inspired 17 bids before ultimately bringing in $21,250. Featuring an outstanding portrait of Clay, the lawyer and statesman who represented Kentucky in both the United States Senate and the House of Representatives, the flag has an extraordinary display presence. This style is in particularly high demand among collectors because of the production of a Polk mate, offering collectors the prospect of owning a matching pair. Heritage Auctions will be offering a much rarer Polk mate in its Aug. 18 Americana & Political auction.

A John Quincy Adams: Profoundly Rare “Pewter Rim” from the 1828 Election, which drew $20,625, is an example of one of the most sought-after and valued political collectibles from the second quarter of the 19th century. Some, like this example, feature a mirror on verso, compared to other models that have a vice president or running mate. To collectors of this pewter rim series, this Adams variety – the lot here is one of just two known to exist – is considered the ultimate prize. Adams campaign memorabilia is extremely rare, making this one of the key offerings in the entire Frent collection.