One of several pieces making its hobby debut in Heritage’s highly anticipated New York City Platinum Night Auction, the jersey worn by Hall of Fame slugger Mel Ott during his National League-topping home run season of 1938 is expected to break records when it takes its turn on the block. Given as a gift to our consignor by the family of the 1938 Giants bat boy, it represents what is arguably the most significant game-worn baseball jersey “find” of the past few years. One of three Ott representations known to exist, the gorgeous flannel is the only example predating his transition from player to manager, and is certainly the only one that finds the Hall of Fame slugger in his prime.

An excerpt from the full item description reads as follows: 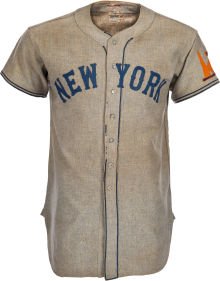 Armed with the knowledge that Major League players in this era were issued two home and two road uniforms annually, we can calculate that the jersey saw approximately thirty-seven or thirty-eight games of action in 1938 and participated in half of Ott’s sixteen home runs at opposing ballparks. Clearly the solid game wear supports such speculation, though the jersey remains 100% original and unaltered, losing two points on the MEARS scorecard only for the loss of the blue piping at the collar and button path. The classic Old English “Giants” is applied to the chest in blue felt, with the number “4,” the second retired by the franchise (after Carl Hubbell), similarly affixed to reverse. Particularly thrilling is the left sleeve patch heralding the impending arrival of the World’s Fair in New York City, an artful silhouette of the Trylon and Perisphere that appeared on Giants, Dodgers and Yankees jerseys this year.

Interior collar holds the proper “Spalding” manufacturer’s label with a size “42” flap tag beneath an embroidered “M. Ott” in red sewn directly into the jersey body. The “38” vintage is similarly executed at interior rear center tail. Of all the Hall of Fame legends to wear the uniform of a New York City franchise during the Live Ball Era, none is as challenging to collectors as Mel Ott, nor is any member of the fabled 500 Home Run Club as uncommon. For the breed of elite collectors whose dreams of ownership have occupied that rocky ground between faint hope and grudging resignation, we are pleased to present this singular opportunity. Don’t expect another.