Robert Crumb’s 1969 Fritz The Cat Cover Art set a world record May 18 for the most valuable piece of American comic art when it crossed the block for $717,000 in Heritage Auctions’Comics & Comic Art Auction in New York. The headlining lot in the firm’s inaugural Platinum Night session, the classic Underground Comix art was also the most valuable lot in the $8.3 million auction May 18-20.

“Artworks from Underground Comix – especially from masters such as Robert Crumb – are becoming recognized in the fine art world as cultural cornerstones,” said Barry Sandoval, Director of Comic Operations at Heritage Auctions. “Three of the top four lots in the auction were by Crumb.” 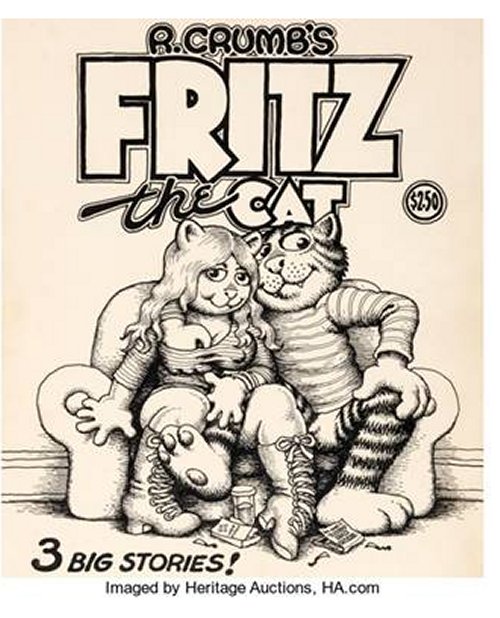 Crumb’s original art for a complete, four-page story from The People’s Comics (Golden Gate Publishing, 1972) and his ironic “Keep On Truckin’” sequel page from 1972 realized $191,200 each. These two pieces are now tied for the second highest price ever realized at auction for Robert Crumb artwork.

Joshua Middleton’s NYX #3 Cover and Concept Art, featuring the first appearance of X-23 (Marvel, 2004) realized $71,700 – setting a record for a piece of 21st century comic art since none has sold for more.

Suspense Comics #3 Mile High Pedigree (Continental Magazines, 1944), a Golden Age treasure with a NM- 9.2 grade from CBCS, was sold for $262,900 – setting a world record for the issue. This pulp-style comic book won top lot among the auction’s comic books. This issue triumphs over the Pennsylvania Pedigree VF/NM 9.0 CBCS copy that realized at $173,275 in 2015 at Heritage, which at the time was the highest price ever realized at auction for a non-superhero comic book.

With only five copies known to receive a higher CGC grade, The Avengers #1 (Marvel, 1963) CGC NM 9.4, collected 14 bids to be sold for $89,625. In this edition, the Avengers (Thor, Iron Man, Hulk, Ant-Man and Wasp) make their first appearance as a team, and thanks to the current blockbuster movies, these comics remain in the spotlight.