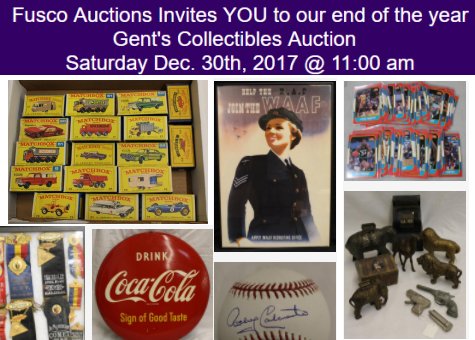 Terms and Conditions of Auction: Please join us this HUGE auction as end the year with an incredible offering of all sorts of collectibles. All lots must be paid for the day of the auction by all those attending the auction. Absentee bidders are welcome. All lots with have a 15% buyer’s premium added to the hammer price with a 3% reduction for cash or check. Please be prepared to take all items purchased home the day of the auction unless other arrangements have been made ahead of time. If you are a reseller you do not want to miss this auction! All sales are final. THIS AUCTION WILL NOT BE ONLINE! MAKE PLANS TO ATTEND TODAY.

And we are still unpacking!