Fusco Auctions invites you to spend an evening with us and enjoy a great selection of Vintage Sports Cards Game Used and Signed Sports Memorabilia Excellent Gent’s Collectibles – Nov.17th 2018 @ 3:00 pm at 4740 Beidler Rd. Willoughby, Ohio 44094. In House preview from 10-3 before the auction. Online, real time bidding has already started at Fusco Auctions.

The vintage sports card and gent’s collectible auction is now online and ready for lot viewing. Absentee and pre-bidding has begun. The live real time auction will begin at 3:00 pm on Nov.17th. This auction features, once again, an enormous offering of Ohio State Buckeyes memorabilia including 7 pairs of Gold Pants and Championship Ring, dozens of game used jersey, the auction also features the Heisman Trophy Winner collection of Linda Levine and an huge offering of Cleveland Spiders, Naps and Indians cards from the William Waldron collection. Perhaps the rarest item in the auction, however, is the Wilt Chamberlain 100pt. game ticket. Also being offered is a type I Lou Gerhid signed photo and a great selection of coins. Even a like new Rolex Submariner watch. We are still adding more lots so keep checking back to see. 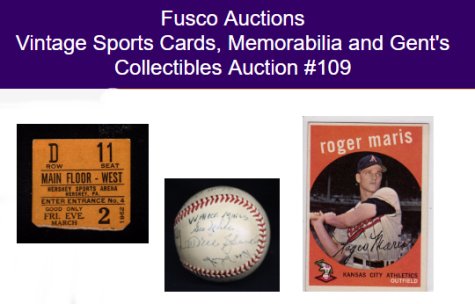 Terms of Auction: All lots will be sold to the highest bidder at one increment over the second highest bidder provided that the bidding has at least achieved the opening bid. There is a buyer’s commission of 18% added to the hammer price with a 3% reduction for cash or a good check.