Fusco Auctions invites you to spend a morning with us and enjoy a great selection of Vintage Sports Cards, Game Used and Signed Sports Memorabilia and Excellent Gent’s Collectibles. The live auction takes place June 3rd, 2018 @ 11:00 am located at 4740 Beidler Rd. Willoughby, Ohio 44094. In House preview from 8-11 before the auction. Online, real time bidding at http://www.fuscoauctionslive.com/. You can pre-bid for the auction now here. 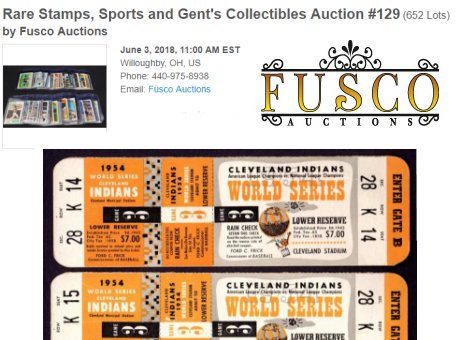 Please note that commission rate on these two sites is 5% higher.

Terms of Auction: All lots will be sold to the highest bidder at one increment over the second highest bidder provided that the bidding has at least achieved the opening bid. There is a buyer’s commission of 18% added to the hammer price with a 3% reduction for cash or a good check.