Game Used Only Auction is proud to offer a great selection of memorabilia in their current February 14 – March 5, 2016 Auction.  Bid, view, register for this auction at gameusedonly.com.  No buyers fees and free shipping with any item over $1,000.  Among the auction highlights include a rookie Cal Ripken Bat, Boggs 89 all-star bat, a Ken Griffey JR 1995 alternate game worn jersey, a Fisk 1983 game used jersey, Bjorn Borg match used items, racquet and some clothing right from his coaches son and much more! 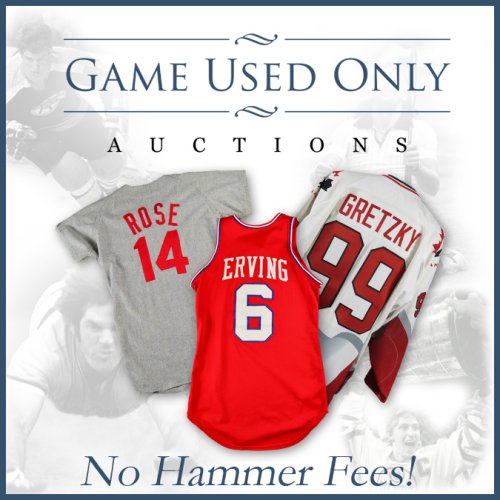 Other Featured Items Include:

Bid, view, register for this auction at gameusedonly.com.

About Game Used Only

Collecting to me was pure enjoyment as a kid. I would still like to be able to enjoy it as I did then, today. After receiving a Darryl Sittler game used stick in 1976, I was hooked! Noticing how cool it was that his name was printed right there on the stick, was very impressive. If we treat this as a business, as every single dealer out there does, why should this business differ than any other? Is it that we as collectors are so in need of an item that we are willing to forget basic business etiquette? Lets not allow this to continue.. We are strong in numbers, if we agree to make a difference, we can.

If I wasn’t playing sports, I was watching them. My cousin and I went to about 30-40 baseball games per season and about 20 to 25 hockey games a year as well. We were main stays at both Maple Leaf Gardens and Exibition Stadium. Everyone knew us and we knew every one. Sometimes the scalpers would give us tickets after the game started if they couldn’t sell them. living  across the street from North York Centennial hockey arena as a kid, was a bonus. When i’d see the Leafs van pull up around 8am, that meant there was a leafs practise that day as the Gardens was busy with other activities. I would get at least 5 or 6 sticks per practise. Wood sticks used to crack more than the new one piece  they use now. During games at Maple Leaf Gardens, when a stick broke, either myself or my cousin, we took turns, would run down the stairs to try and time it so the stick would be walked right past us to the broken stick room. Sometimes they would give us the stick, sometimes not but either way it was always a rush running down those stairs. During warm ups, we would hang over the glass and ask players for their sticks after the game. We got several sticks in this fashion as most hockey players were really good guys.