With the final days of the 2014 auction season rapidly ticking away, Heritage Sports Collectibles assured that it would defend its title as the hobby’s auction leader with a $7.15+ million total in its Nov. 6-8 auction, lifting Heritage Sports’ annual tally to $30 million.

Prices were consistently strong in the auction across one of the most diverse and vast auction catalogs Heritage has ever produced, with football memorabilia in particular providing some of the brightest fireworks of the sale.

“The John Kindler Collection of game worn football jerseys proved what we have long suspected,” said Chris Ivy, Director of Sports Auctions at Heritage. “Football memorabilia is a collecting genre with tremendous growth potential. We saw prices exceeding even our optimistic projections and we expect that trend to continue.” 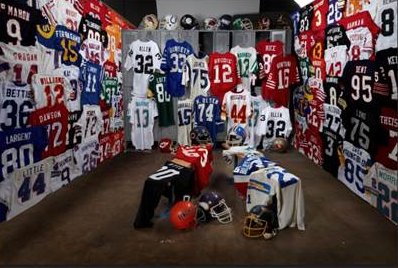 The assembly of recently unearthed gridiron gear from hobby pioneer John Kindler has already garnered nearly $450,000 in sales, with more offerings to come in future Heritage events. Some top prices in this auction included an Auburn Tigers gamer from Bo Jackson for $28,680, and an Oklahoma State Cowboys jersey from Barry Sanders for $26,290.

Baseball memorabilia isn’t quite ready to cede its dominance in the hobby to football, however, with top prices across the full spectrum of our National Pastime:

The ring issued to St. Louis Cardinals pitcher George Munger for his part in capturing the 1946 World Series Championship sold for $35,850 and an exceedingly rare single signed baseball from early Hall of Famer Napoleon Lajoie commanded $41,825. Ken Griffey, Jr. illustrated the strength of the “modern” game used market with a $59,750 result for the baseball that made him a member of the 600 Home Run Club.

The most voluminous assembly of trading cards in a single Heritage auction made the November event one of the most trafficked for collectors of vintage cardboard, with record prices the predictable result: Willie Mays’ 1952 Bowman card, one of five rating PSA Mint 9, eclipsed the previous high with a $31,070 price. Fellow Hall of Fame center fielder Mickey Mantle likewise set a new mark with $21,510 for a PSA Mint 9 example of his 1958 Topps card, as did hockey legend Jean Beliveau with $16,730 for the finest example known of his 1953 Parkhurst.

Heritage Auctions, headed by Steve Ivy, Jim Halperin and Greg Rohan, is the world’s third largest auction house, with annual sales more than $900 million, and 850,000+ online bidder members. For more information about Heritage Auctions, and to join and gain access to a complete record of prices realized, along with full-color, enlargeable photos of each lot, please visit HA.com.