A one-of-a-kind basketball rookie card of late Minneapolis Lakers Hall of Fame center George Mikan sold for $403,664 to record the highest bid in SCP Auctions’ 2015 Fall Premier online auction, which concluded Sunday morning. The impeccably preserved 1948 card (#69) from the lone Bowman Basketball card set ever produced is the only one of its kind to ever receive a grade of “Gem Mint 10” from third-party authenticator PSA Cards. The card previously sold in 2009 for $225,000, but this auction nearly doubled its previous world record price. The entire auction of more than 1,000 sports memorabilia lots brought in more than $4 million.

“It’s great to see that a card of Mikan, a player who redefined his sport, is now redefining the vintage basketball card market,” said SCP Auctions Vice President Dan Imler. 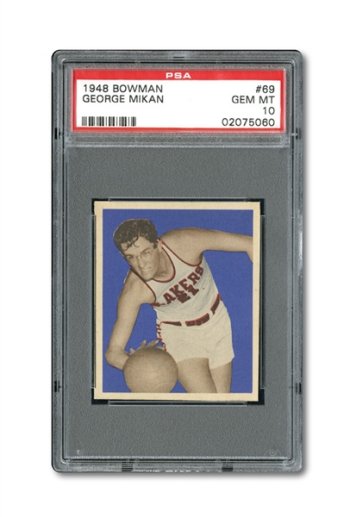 The prestigious Jeff Figler Collection was led by the sale of a complete set of 1952 Topps Baseball cards that went for $75,205, while the E. Lisk Wyckoff Collection celebrating the history of the New York Yankees was led by the $27,584 sale of a Don Larsen signed and inscribed game-used baseball from his Game 5 perfect game in the 1956 World Series. The Jo Jo White Basketball Collection, meanwhile, brought in $104,029, led by the sale of his 2008 Boston Celtics NBA Championship ring for $53,758.

About SCP Auctions
SCP Auctions, Inc. has been a leader in brokering and auctions of important sports memorabilia and cards since 1979. The Southern California based firm conducts three online auctions every year, highlighted by its Premier Auctions in the spring and fall. SCP Auctions has handled some of the most significant individual items and prominent collections in their field, such as the record-setting sale of the earliest known jersey worn by New York Yankees legend Babe Ruth ($4.4 million), the famed T206 Honus Wagner baseball card ($2.8 million) and the only known Jesse Owens’ gold medal from the 1936 Berlin Olympic Games ($1.4 million). Interested bidders can call (949) 831-3700 or visit SCP Auctions online at www.SCPAuctions.com for more information on how to participate.