An important, leopard skin saddle pad owned by George Washington highlights Heritage Auctions’ May 13 Americana and Political auction, which will include a separate catalog titled “Washington and the Founding Fathers.”

“This special auction was inspired by the great success of our September 2016 ‘Lincoln and His Times’ auction,” Americana Auctions Director Tom Slater said. “The eclectic mix of items includes important offerings from categories such as period display pieces, autographic material, paper ephemera, fine art and more. Our goal was to present an auction containing items which appeal to a diverse range of specialized collectors, as well as to those who simply love objects which evoke the earliest days of American history.” 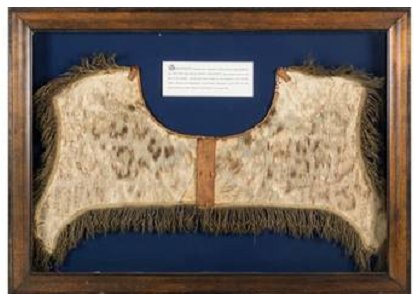 Two of the most important items come from the collection of the Society of the Sons of the Revolution, an organization founded in the 19th century for descendants of Revolutionary War veterans.

Also consigned is a large silk banner supporting “Washington’s Policy” (est. $100,000) which was carried in a 1789 parade honoring the recently-installed president when he visited Boston. Washington’s inauguration heralded a period of stability and economic growth, and he enjoyed strong support from the various artisan trade guilds. Each guild had a delegation marching in the parade, and this banner led the contingent of glaziers, or window pane specialists, and plumbers. The Sons of the Revolution have been custodians of both relics since the 1920s.

Another featured item is a Nov. 22, 1803 letter, penned by Thomas Jefferson to Georgia Governor John Milledge (est. $150,000). The recent Louisiana Purchase had opened up many possibilities for developing commerce and settlement between the coastal states and the port of New Orleans. However, entrenched Native American populations posed an obstacle to this anticipated economic development. Jefferson addresses immediate steps regarding the Cherokee and Creek peoples in Georgia, but most significantly expresses the vision that these groups would eventually be relocated west of the Mississippi in the newly acquired territory. This plan ultimately would culminate in the infamous “Trail of Tears” some three decades later, when large numbers of Cherokee Indians were forced to give up long-held property and relocate to inhospitable land in Oklahoma.

No auction focusing on George Washington would be complete without examples of the popular brass clothing buttons worn to celebrate his 1789 Inauguration ($5,000). The sale includes several outstanding examples, including particularly choice buttons of classic designs and a possibly unique variant struck in silver (est. $10,000).

Important early broadsides include a 1774 Massachusetts issue (est. $10,000) all but declaring hostilities with England and a rare early report on the events at Lexington and Concord.

Significant autographic offerings include an appointment document signed by Washington and by Jefferson as Secretary of State, an extremely rare document by one of the scarcest signers of the Declaration of Independence George Taylor (est. $36,000), and a 1776 document signed by Continental Congress President John Hancock appointing Bunker Hill hero Benjamin Haskell as an officer in the Continental Army (est. $6,000).

Among the most unique items in the auction is a circa 1800 pendant containing intertwined hair locks from George and Martha Washington (est. $40,000), with provenance back to the wife of Washington’s private secretary, Tobias Lear.

The entire Americana & Political Auction will be available for viewing and bidding online around April 25 at HA.com, under the heading of the Political and Americana Auction #6172.