Not only did the earliest artifact referring to George Washington as the “Father of His Country” set a world record when it sold for $225,000 in Heritage Auction’s Feb. 24 American & Political Auction, but the sale itself set a world record as the highest grossing auction of political memorabilia collection ever offered.

The David and Janice Frent Collection of Political & Presidential Americana, Part II, realized a record $1.2 million from 641 bidders. The sale eclipsed the previous world auction record when The Frent Collection debuted at Heritage in October 2017, generating $911,538. 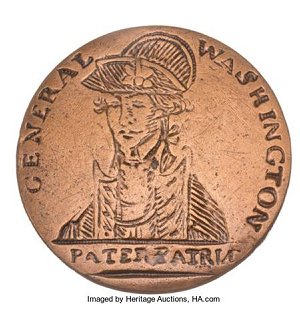 “To say this auction was a pulse-pounder is an understatement,” said Tom Slater, Director of Americana Auctions at Heritage. “It’s been a career highlight bringing this collection to auction and the results have just been astounding.”

The rare Washington artifact is now the world’s most valuable Washington button, created to celebrate the first president’s 1789 Inauguration. It features a crisp, stamped bust of Washington and the words “Pater Patriæ,” a Latin phrase meaning “Father of his Country.” Modern collectors avidly seek a wide variety of coat button designs honoring Washington that were sported by patriotic Americans. The Frent Collection features some 50 assorted examples, believed to be the largest such holding ever assembled.

Surprises did not stop with Washington, as an 1868 silk campaign flags for Ulysses S. Grant, one of just three believed known in this design, raced to $62,500, more than triple its presale estimate. A stunning 1860 brooch featuring an ambrotype portrait of Abraham Lincoln by Mathew Brady, depicting the president in the iconic “Cooper Union” pose, sold for $35,000 – a new high water mark for this item at auction.

Considered one of the finest designs among historic political textiles, an outstanding example of the “Ship of State” Silk Campaign Flag from Henry Clay’s 1844 campaign ended at $32,500. Another 19th century textile, an important and near mint 1864 Jugate Silk Campaign Ribbon for Lincoln and Andrew Johnson sold for $21,250.

A unique 1920 Jugate Postcard featuring Democratic running mates James M. Cox and Franklin D. Roosevelt led the auction’s extensive selection of 20th century memorabilia when it sold for $27,500 – more than 10 times the highest previously reported price for a political postcard. The record price resulted from an epic contest between a leading collector of political post cards and a top specialist in items relating to the Cox candidacy. “Sometimes bidders will just dig in their heels,” Slater observed, “and such battles are particularly likely when an item holds interest for two different types of collecting specialists .” A large Cox and Roosevelt jugate poster backing the League of Nations, also believed to be the only known example, sold for $21,250.

Heritage Auctions will offer an online-only session from The Frent Collection beginning at 10 a.m. CST, March 10 on HA.com. The 509-lot offering includes period memorabilia relating to Lincoln and an extraordinary array of political pinbacks and ribbons. To learn more, visitHA.com/6198.