The baseball glove that 11-year-old fan Jeffrey Maier used to catch Derek Jeter’s 1996 ALCS Game One home run ball, robbing right fielder Tony Tarrasco of the catch and propelling the Yankees to a controversial and still disputed victory – and many would say it was the spark that lit the modern Yankees dynasty – will be up for auction on Saturday night, Feb. 21.

The glove is being offered by Heritage Auctions, at the Fletcher-Sinclair Mansion (2 E. 79th Street, at 5th Ave.), as part of the company’s Sports Collectibles Platinum Night Auction. 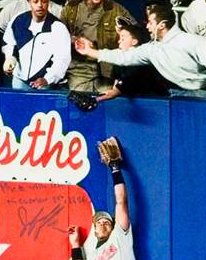 “This is, charmingly, a kid’s sandlot baseball glove,” said Chris Ivy, Director of Sports Auctions at Heritage. “It was obviously well-used before being brought to Yankee Stadium on the night of Oct. 12, 1996. Yet this little black leather Mizuno glove hauled in perhaps the most consequential and memorable home run of Derek Jeter’s long and prolific career – and made a household name of its owner.”

After Jim Leyritz was retired on strikes to start the bottom of the eighth inning, the American League Rookie of the Year came to the plate to face hard-throwing Orioles reliever Armando Benitez, trailing by one run with one out and the bases empty. Jeter swung at the first offering and sent a long drive to deep right field. Bob Costas made the call.

“In right field… Tarasco… going back to the track… to the wall… and what happens here? He contends that a fan reaches up and touches it. But Richie Garcia says no. It’s a home run!”

Replay quickly confirmed Tarasco’s tale, but that could not overturn the blown call. Jeter circled the bases, tying the game. After two more scoreless innings, Bernie Williams would send Yankee fans home with an eleventh inning solo shot to walk off with an unlikely five to four victory. The Yankees went on to win the World Series, ending their longest Championship drought since Babe Ruth supplied the teams’ first in 1923. Three more World Championships would come in the next four seasons and the Yankees – or the Evil Empire, as many non-Yankee fans consider it – were once again the center of the baseball world.

The glove is consigned to auction by the collector who purchased the glove from Maier directly, and is accompanied by an array of photographs of Maier holding the glove both as a child and as an adult, along with his signed letter of provenance.

Quite a legacy for an 11-year old kid.