The gloves worn by both Muhammad Ali and Sonny Liston in the famous May 25, 1965 “Phantom Punch” bout in Lewiston, ME, the most controversial sports event in history – and a moment that perfectly encapsulates the turmoil and change of the mid-1960s America –sold as a set on Feb. 21, 2015, for $956,000 in Heritage Auctions’ Platinum Night sports auction in New York.

The gloves were consigned to auction by Los Angeles collector Seth Ersoff, who acquired the pair from the family of the boxing commissioner for the state of Maine in 1965, who seized the gloves after the bout’s scandalous end – Ali’s “Phantom Punch” – just under two minutes into the first round.

The buyer, and advanced collector, has chosen to remain anonymous. 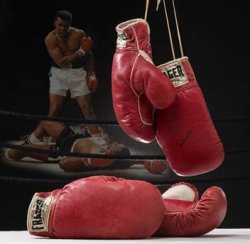 “These gloves are among the most important pieces of memorabilia to ever come to market,” said Chris Ivy, Director of Sports Auctions at Heritage, “transcending sports. The drama and outrage that swirled around the Ali-Liston fights were a microcosm of America’s growing pains of the mid-1960s.”

The rematch was the first time that Muhammad Ali stepped into the ring as Muhammad Ali; not only had he just officially changed his name, the fight and everything that happened around it – beginning to end – put Ali on the path to becoming not only the greatest boxer of all time, but one of the most beloved human beings on the planet.

The moment of the fight is best captured in the famous Neil Leifer photograph, an image indelibly stamped upon the pages of our collective consciousness, a masterpiece of the genre and the cover shot of the 1999 Sports Illustrated retrospective “The Century’s Greatest Sports Photos.” The image, in which both pairs of these gloves can be clearly seen, expertly distills the Ali mystique even as it documents what is arguably the most atypical moment of his career.

The controversy lingered for quite some time, with Ali emerging in time as a cherished world figure and with Liston dying ignominiously, alone, in the waning days of 1970. With the Golden Anniversary, and the national and international media attention surrounding the auction of these gloves, it’s clear, with hindsight, that the fight represented a seminal and unique American moment.