Goldin, the leading marketplace for trading cards, collectibles and memorabilia, announces it is expanding into video games. Goldin’s Comic Book, Video Game and TCG Auction — the company’s first to solely focus on collectibles beyond sports — will feature 250 rare and valuable video games, comic books and trading card game items. Bid, view and register for the September 18, 2021 auction at goldinauctions.com.

The auction features some of the rarest comic books in the world, including the 1940 D.C. “Batman #1” comic (graded CGC 8.0), the first comic dedicated exclusively to The Dark Knight which features one of the most iconic covers from the Golden Age of comics. To say this comic is jam-packed with action would be an understatement, as it includes the first appearance of classic Batman villains the Joker and Catwoman. Also included in the auction is the iconic 1962 Marvel “Amazing Fantasy” #15 comic (graded CGC 8.5), which features the first-ever appearance of Spider-Man. The story, written by Stan Lee, lays out the origin of Peter Parker and also includes the first appearance of Uncle Ben and Aunt May. 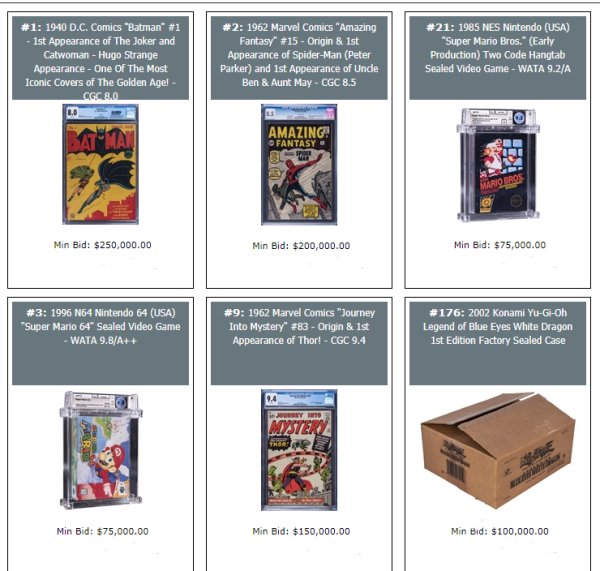 The company’s expansion into the retro, collectible video games market comes amid a period of massive expansion for the category. Over the last several weeks, prices for classic games  at auction have regularly blasted past previous record highs. This auction boasts a 1986 NES Nintendo “The Legend of Zelda” third print video game (graded WATA 9.0/A), a non-graded second print version of which recently sold for over $400,000. Additionally available for bidding is a 24-Karat solid gold Pikachu Pokemon card (graded PSA EX 5) that was created to celebrate the beloved franchise’s 20th anniversary in 2016 and is a reissue of the very first Pikachu card ever printed.

“The collectibles market is growing and changing at a breakneck pace with new categories and items emerging all the time,” said Goldin Executive Chairman and Founder Ken Goldin. “Pokémon cards were the most recent example of non-sports items that have captivated collectors and now video games have exploded onto the scene as the next big thing. We’ve provided best-in-class services to buyers and sellers in sports collectibles and we’ll continue to provide the same level of expertise to fans in the video game category.”

“The level of enthusiasm for collectible video games is absolutely exploding,” said Goldin Video Game Consignment Director Jared Mast. “We’ve been receiving some spectacular consignments for our upcoming auction such as the early production Legend of Zelda game that gaming fans would absolutely love to get their hands on. The future is bright for the category overall and for those gamers out there looking to sell some of their valuable games or build their collection!”

Goldin has built a reputation as the trusted leader in trading cards, memorabilia and collectibles. The company has consistently broken auction records this year and has already done over $250 million in sales in 2021.

Goldin is actively accepting consignments for its auction, which runs from August 30 to September 18. To inquire about consigning your video games, comic books or trading card game cards, email info@goldinauctions.com.

Goldin is the leading marketplace for trading cards, collectibles and memorabilia. Founder Ken Goldin has sold more than $1 billion in memorabilia from many of the biggest names in sports, history, and pop culture. The company routinely sets records for the most expensive trading cards and other memorabilia ever sold. Lifelong collectors and new hobbyists alike trust Goldin because the company professionally authenticates everything it sells. Goldin is the official auction partner of the Naismith Memorial Basketball Hall of Fame, The Major League Baseball Players Alumni Association, The Jackie Robinson Foundation and the Babe Ruth Birthplace and Museum. Learn more at www.goldinauctions.com, on Twitter and Instagram.