Three lots of rare memorabilia connected to the most infamous event in baseball history will hit the auction block in the Goldin Auctions 2015 Winter Auction scheduled for January 12, through February 7, 2015 at www.GoldinAuctions.com. The items include; a baseball autographed by 18 members of the “Black Sox” including six of the eight players fingered in the scandal; a paycheck from pitcher Eddie Cicotte signed by both Cicotte and owner Charles Comiskey; and a very rare ticket stub from Game 1 of the 1919 World Series.

“The 1919 Black Sox represent one of the most historic baseball events of all-time, and as a result the limited memorabilia related to the scandal and the players involved are always in demand,” said Ken Goldin, Founder of Goldin Auctions. “We are thrilled to bring these three items to auction.”

Here’s a more detailed description of the three Black Sox lots being offered for sale. For more details and images of the items and the 1,400+ lots of memorabilia, or to receive a free auction catalog, visit www.GoldinAuctions.com.

Lot #1 – 1920 Chicago White Sox Signed Baseball – featuring 18 player signatures including six of the eight players named in the scandal. Joe Jackson’s rare signature appears on the sweet spot and is flanked by the likes of Buck Weaver, Eddie Cicotte, Lefty Williams, Swede Risberg and Hall of Famer Eddie Collins. The Ban Johnson Reach Official American League ball has a rich amber tone due to a coat of shellac. “White Sox – 1920” is hand written on one of the panels. The signatures are in bold black fountain pen and grade from 4/10 to 6/10. Full Letters of Authenticity from PSA/DNA and JSA. 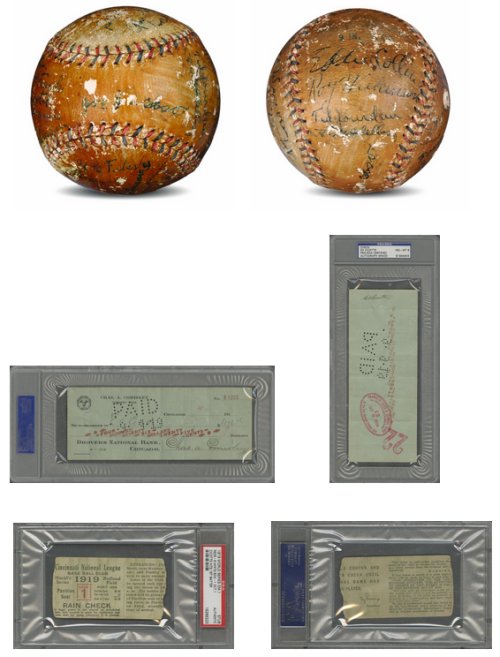 Lot #2 – Eddie Cicotte 1919 Payroll Check signed by team owner Charles Comiskey on the front and Cicotte on the back. It is not that difficult to see how Eddie arrived at the decision to sell out as this $476.25 payroll check represents a bi-monthly portion of the veteran’s $6,000 salary for the 1919 season. This green voucher, dated September 5, 1919, is drawn on Comiskey’s Drovers Bank account. The White Sox patriarch has signed the lower right corner in his imperial script and the knuckleballer himself has endorsed the reverse. The check carries the expected cancellation stampings and perforations, none of which affects the signatures. The check has been encapsulated and graded a NM-MT 8 by PSA/DNA.

Lot #3 – 1919 World Series Game 1 Ticket Stub – The lucky fan who shelled out $2.20 for this pavilion seat witnessed the moment that signified that the fix was in. After the Sox failed to score in the top of the first, Cicotte drilled the Reds leadoff man Morrie Rath with his first pitch to alert gamblers that the fix was in. This grayish-white pavilion ticket is a silent piece of that infamous game. Torn on both ends, the ticket measures roughly 2″ x 3 Â½ ” and exhibits the kind of wear you would expect from a ticket nine decades old. Since precious few tickets from Game 1 of the 1919 Series have survived, the historical significance of this piece more than compensates for its well-used appearance. The ticket has been encapsulated by PSA/DNA and graded AUTHENTIC.

The jersey has been authenticated by MEARS as one worn by DiMaggio during the 1942 season. Although it is rare to successfully photo match a jersey that is 70 years old due to the poor quality of photography available, MEARS did find 1942-dated photographs of the Yankee Clipper and established that he wore two different home jerseys that summer, noted as “Jersey #1” and “Jersey #2”. The pinstripes found on the Yankees home jersey act almost as fingerprints, as the famous blue stripes fall differently in relation to the graphics, sleeves and placket on each jersey. MEARS was able to state “there is a very high probability that the jersey identified as Jersey #2 could be the offered jersey” and their illustrated worksheet documents their findings.