Goldin Auctions has sets the bar high by offering many of the industry’s most unique and valuable sports, entertainment and historical memorabilia in its auction. The bar has now been raised to new heights, as the Goldin Auctions 2018 Winter Auction is loaded with dozens of truly special lots.

“Although we have sold many of the most valuable pieces of sports memorabilia and our auctions always feature many special items, I’ve never seen an auction as loaded as this one with more historically significant and unique museum-quality items,” said Ken Goldin Founder of Goldin Auctions. “We are very excited to see the response from collectors when they peruse this catalog.”

The Goldin Auctions 2018 Winter Auction is open for bidding from January 22 through February 17 at GoldinAuctions.com. Here are some of the auction highlights. 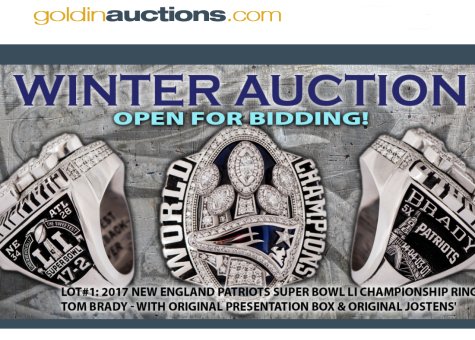 Lot #1 – 2017 New England Patriots Super Bowl Ring – “Tom Brady Family Ring” — An additional ring ordered for a Brady family member and approved by Tom Brady. It is displayed in a presentation box with an official Jostens’ COA and appraisal made for Brady. The size 10 ½, ring weighs 77.3 grams and features 260 diamonds. The left shank features “Brady” and “Patriots” with an image of the lighthouse and bridge, the signature view of Gillette Stadium and is accented with “5X” and the years of each Patriot Super Bowl win. A search of public databases found this to be the first ring or award of any type related to Brady that has ever been offered for public sale. As for a realistic comparison, in 2013 Goldin Auction sold a 2000 Lakers NBA Championship ring ordered by Kobe Bryant for his father Joe Bryant for $173,000.

Lot #10 – Bobby Riggs Historic “Battle of the Sexes” Tennis Racket – A tennis racket from perhaps the most important sporting event of the past 50 years used by Riggs in his match against Billie Jean King on September 20, 1973 before more than 30,000 spectators at the Houston Astrodome and 90 million television viewers. Riggs used several rackets during the match in which he lost to King including this AMF Head model. This is the first to be offered for sale. It is mounted in a 23 ½” x 32″ shadow box display with a photo from the event and a handwritten letter from Riggs to long-time friend Doug Dean reading; “Doug I’m glad you have taken such good care of my tennis racket the one that I used and lost before 90 Million People around the world in 1973 – Bobby Riggs”. This magnificent historical piece comes with a LOA from JSA, who have authenticated Riggs’ signature and inscription.

Lot #9- The Original UFC V Superfight Championship Belt – Created for the Royce Gracie vs Ken Shamrock fight on April 7, 1995, it is the holy grail of UFC memorabilia. With the UFC still in its infancy, the organization decided that a single, marquee “Superfight”, — a rematch from UFC 1 Gracie VS Shamrock — would headline UFC V. UFC founder Art Davie commissioned legendary belt maker Joe Marshall to design the first-ever UFC V Superfight championship belt. In the center it features a 10″ x 10″ gold crest The Ultimate Fighting Championship V Superfight Champion flanked by the IFC and U.F.C. W.O.W. Promotions, Inc. crests on both sides” After a 35-minutes battle, the match was declared a draw and, as a result, the belt was not awarded. The lot also includes several documents related to UFC 1 (Gracie-Shamrock) accompanied by hand-signed descriptions from Mr. Davie.

Lots #23-39 – The Wayman Tisdale Collection – Among the highlights of the 17-lots are Tisdale’s 1984 Olympic Men’s Basketball Gold Medal and #12 white jersey. The medal represents the last men’s Olympic basketball gold medal won by an amateur team before the formation of the Dream Team. Measuring 2 ½ inches in diameter, it is etched with a high-relief of a Greek sporting scene on once side, and on the reverse, a high-relief depiction of Nike, the Greek goddess of victory, as well as “XXIII Olympiad Los Angeles 1984”. Other highlights of the collection include; his 1982-85 Univ. Oklahoma #23 game-used jersey; 1985-1989 game-used Indiana Pacers road jersey; 1994-95 game-used Phoenix Suns home jersey; and several of his guitars. All items come with an LOA from Regina Tisdale, wife of the late Wayman Tisdale.

Lot #2 – 1972 Hank Aaron Game Used & Signed Braves Road Jersey (MEARS A10, JSA, Steiner) — Aaron has signed the left sleeve of this jersey in bold black marker. MEARS also states that this jersey is “the highest graded from [the 1972] season” and that “with respect to 1972 Hank Aaron game worn jerseys, this is only one of two known surviving examples.

Lot #3 – 1959 Ted Williams Game Used Red Sox Home Uniform Including Jersey, Undershirt and Pants (MEARS A10) – Not only is this one of the finest Williams home jerseys in existence, but it also offers the rare opportunity to own a complete uniform from the Hall of Famer that also includes his black ¾ sleeve undershirt. Previously Goldin Auctions sold just a 1959 Williams road jersey for $144,000.

Lot #4 – 1956-60 Ted Williams Game Used and Signed Hillerich & Bradsby W183 Model Bat (PSA/DNA GU9, MEARS A9.5 & Beckett) – This bat dates from Williams’ retirement comeback era and his final five seasons. Shows excellent use and is un-cracked with several ball marks visible on the barrel. Williams has added his signature, which appears on the barrel lightly in blue pen, with the inscription “To Ed Best Wishes”.

Lot #14 – 1957 Willie Mays Gold Glove – The first of 12 straight gold gloves earned by baseball’s greatest living player. This award was gifted by Mays to his friend James “Mudcat” Grant. It is the only Mays award that has ever been made available to the public.

Lot #8 – 2017 Aaron Judge Yankees Rookie Season Game Used HR #17 Bat – The first Judge HR bat to come to market. This Chandler AJ99.2 model bat was used to hit his 17th home run of his historic rookie season on May 29 in Baltimore off Dylan Bundy. The bat which was used from May 27-June 1 was broken in an at-bat off Blue Jays pitcher Marco Estrada, an RBI single. Judge has signed this bat in silver marker and inscribed “ROY”, “2017 Game Used” and “Rookie HR Record”. Comes with a LOA from PSA/DNA for game use, along with photo matches to two specific plate appearances and a LOA from Anderson Authentics for signature and game use. There is also a MLB Authenticated hologram which dates this bat to the June 1 game.

Lot #20 – David Ortiz Final Career HR Bat (#541) -This Marucci Papi34 Custom Cut III model bat was used by Ortiz to hit his final career HR (#541). There are numerous ball marks, stitch impressions, blue ink transfers and cleat imprints present on the barrel. Ortiz has added his signature on the barrel in contrasting silver marker and added the inscriptions “HR 541”, “Game Used 9/30/16 VS Blue Jays off Cecil”. This historic bat comes fully authenticated with a MLB Authenticated hologram and a Fanatics hologram which authenticates that bat was signed by Ortiz and added the inscriptions on the bat. 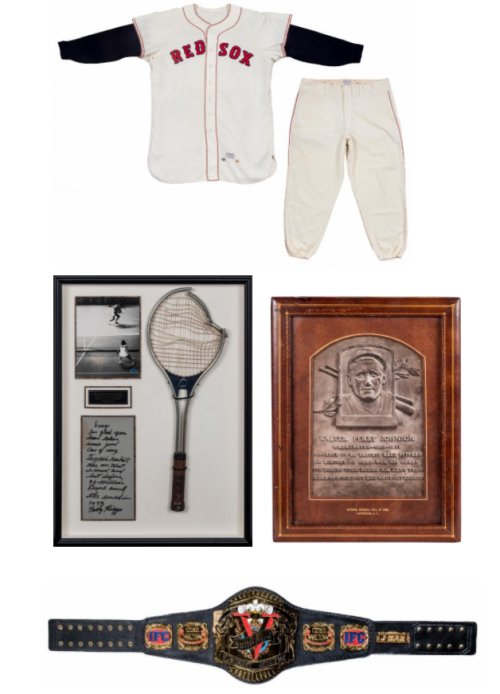