When the Goldin Auctions 2019 Summer Premium Live and Catalog Auction opened for bidding in July, it was obvious to everyone that some record sale prices would be set. And, by the time the final bid was placed, new records were established for trading cards and game-worn collectibles from familiar names including Honus Wagner, Mike Trout, Michael Jordan, Kris Bryant, Mike Schmidt and Pokemon as well as one unfamiliar name -Luis Robert.

The live auction, which closed on August 2, at the National Sports Collectors Convention in Chicago was headlined by the record sale price of $442,800 for the only known Wagner game-used Louisville Slugger Model Signature Model 125 bat. Meanwhile, a dozen lots of Jordan memorabilia including jerseys, sneakers, trading cards and more sold for nearly $400,000. This include a 1997-98 game-worn playoff jersey ($137,376) and a record sale price of $81,180 for Jordan’s “first” Bull jerseys from his introductory press conference. 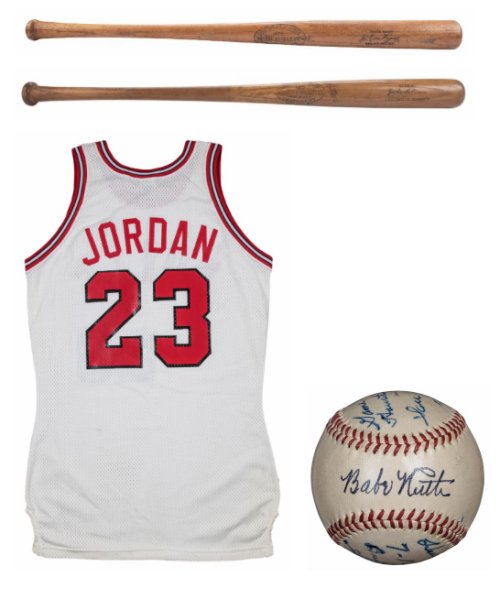 “This was truly a remarkable event and once again illustrates the health and vibrancy of the industry and the quality of the items we are offering,” said Ken Goldin, Founder of Goldin Auctions. “In addition to these individual records, we established new standards for the most individual bidders and bids Goldin Auctions has ever had in an auction. In fact, with $6 million in sales it was our second-highest grossing auction – trailing only the inaugural Great American Trading Card Auction which featured the $3.2 million sale of the Jumbo Wagner.”
Goldin Auctions is currently accepting consignments for the annual October Legends Auction and the Naismith Memorial Basketball Hall of Fame Auctions in the fall. Here’s a look at some of the auction highlights. Record Prices are indicated with an *. The complete auction catalog is available at GoldinAuctions.com.

About Goldin Auctions
Sports memorabilia impresario Ken Goldin has sold more than $700 million in memorabilia from many of the biggest names in sports, history and pop culture and was the pioneer of using the medium of television to sell sports memorabilia. Over the past few years, Goldin Auctions sold a Honus Wagner T206 card for a public sale record $3.12 million, Babe Ruth’s 1918 contract for a record $1.02 million, the Mike Piazza Post-9/11 home run jersey for $365,000, and the 1979-80 Wayne Gretzky PSA GEM MT 10 rookie card for a record $465,000. Goldin Auctions strives to break new ground and offer collectors the best in collectible treasures up for auction in the marketplace. Goldin Auctions is the official auction partner of the Naismith Memorial Basketball Hall of Fame, the Jackie Robinson Foundation and the Babe Ruth Birthplace and Museum. For more information, visit www.goldinauctions.com