Just one day before Derek Jeter’s expected induction into the National Baseball Hall of Fame, the Goldin Auctions 2020 Winter Auction opens for bidding with three historic pieces of memorabilia from Jeter’s past in the 1,500-lot auction; his first Yankees jersey, the original scouting report from famed Yankees scout Dick Groch and a rookie card expected to fetch upwards of $200,000. In all, the auction offers more than 30 items of Jeter memorabilia and is open for bidding from January 20 through February 22 at GoldinAuctions.com.

“Derek Jeter is next in a long-line of Yankee Hall of Famers from Ruth and Gehrig to DiMaggio and Mantle who are beloved and accordingly the most popular players for memorabilia collectors after their playing careers,” said Ken Goldin, Founder of Goldin Auctions. “The scouting report and first Yankee jersey are truly unique and required items to tell Jeter’s story. It’s our honor to share these items with collectors.”

With less than a month until pitchers and catchers report to spring training, it’s not surprising that the auction includes a wide selection of rare baseball memorabilia including the only Joe Jackson signed bat and the only authenticated Jackie Robinson game-used bat from the 1955 championship season.

Here’s a look at the highlights of the 2020 Goldin Auctions Winter Auction. The full auction catalog is available at GoldinAuctions.com.

Lot #2 – 1980 Lake Placed Winter Olympics “Miracle on Ice” Gold Medal presented to Steve Christoff – Created by legendary jeweler Tiffany & Co., the obverse features the iconic Olympic torch and rings surmounting the mountains of Lake Placid with “XIII OLYMPIC WINTER GAMES” in raised letters. The reverse boasts a pinecone and branch with “LAKE PLACID 1980” in raised letters alongside the game’s logo. “ICE HOCKEY STEVE CHRISTOFF” is engraved below, forever linking this historic Gold with the man who helped make it possible. Comes with a detailed letter of provenance from Steve Christoff.

Lot #3 – 1980 Steve Christoff Game Worn “Miracle on Ice” USA Olympic Hockey Jersey from Gold Medal Winning Game – This blue jersey was worn by Christoff when his goal tied the game and inspired his team to do the impossible and win gold with a 4-2 victory over Finland. It shows great game use, with toning throughout and some snags to the mesh fabric, light staining, abrasion marks and scuffs. The original Norcon size XL label is intact inside the collar.

Lot #140 – 1995 Derek Jeter Major League Debut Game Used, Photo-Matched and Signed New York Yankees Road Jersey – Also Worn for First MLB Hit (Yankees-Steiner) – This Yankees road jersey, originally tagged for Bernie Williams in 1994, was worn by Jeter during his first tour with the club in 1995. A Russell Athletic and size 46 MLB Authentic Diamond Collection manufacturers label with “100% Polyester” flag tag and a faded “51 B. WILLIAMS 94” strip tag is on the left front tail. Remnants of the number 7 and a black armband are on the left sleeve in memorial of Yankees’ legend Mickey Mantle’s passing on August 13, 1995. The Yankees often recycled their jerseys for multi-season use and with the Mantle memorial armband and number removed, this jersey appears to have been made ready for the 1996 season. Jeter has signed his name in black marker below the “YORK” on the front and inscribed “Game Used 5-29-95 MLB Debut”. Jersey is photo matched and comes with a photo-match LOA from Sports Investors Authentication

Lot #16- 2019 Donald Trump Autographed Set of Impeachment Documents from House Judiciary Committee -Donald Trump, the 45th President of the United States, joined former presidents Andrew Johnson and Bill Clinton as the only presidents in US history to be impeached, when on December 18, 2019, two articles of impeachment were voted on by the full House of Representatives. Offered here is the full report conducted by the House Judiciary Committee for the “IMPEACHMENT OF DONALD J. TRUMP PRESIDENT OF THE UNITED STATES”. On the night that President Trump was formally impeached, he was in the middle of a campaign rally in Battle Creek, Michigan and according the notarized letter of provenance, Trump signed the title page in bold black marker across the page. Comes with a letter of provenance from Jonathan Moore, who states in his letter that he “attended President Trump’s rally in Battle Creek, Michigan on December 17th, 2019 and asked him to sign the Articles of Impeachment that I handed him, and he happily complied.” Additionally, there are LOAs from Beckett Authentication and PSA/DNA for Trump’s signature.

Lot #4 -1960 Heisman Award Presented to Al Helfer For Lifetime Contributions as Master of Ceremonies For The Annual Heisman Banquet — Al Helfer, who was a longtime emcee for the annual banquet held by the Downtown Athletic Club, was presented this honorary trophy in 1960 for his many years of service. This trophy was made to the exact specifications presented annually to college football’s top player.

Lot #5 – Shoeless Joe Jackson Signed John Mostil Game Used Hillerich & Bradsby Pre Model Bat (PSA/DNA & JSA) – Mostil, was a teammate of Shoeless Joe on the 1918 and 1921 White Sox, and carved out a solid professional career with a .301 average in his nine seasons. In 1925, he led the A.L. in in runs scored, stolen bases and walks and in 1926 finished second in the MVP voting. Sadly, Mostil tried to take his own life in 1927 by slashing his wrists, his throat while also stabbing himself. He survived, but was never the same, and retired in 1929. It is believed that during Mostil’s last years that this bat was presented to Jackson for his autograph. Due to his illiteracy, Jackson typically only signed required legal documents, however, he did honor his former teammate’s request and signed his name. After Jackson signed the bat, it was returned to Louisville Slugger for reproduction as visible on the left barrel in vintage grease pencil is the factory side writing “Johnny M”.

Lot #6 – 1955 Jackie Robinson Game Used & Signed Hillerich & Bradsby R115 Model Bat – World Series Championship Season (PSA/DNA GU 10 & Letter of Provenance) — This bat from noted collector Paul Hill, states in his letter of provenance that it was given to him by Jackie at Connie Mack Stadium in Philadelphia during the summer of 1955 and signed by Robinson in his presence and has been in his personal collection. One of the very rare game used bats from Robinson during Brooklyn’s only World Series winning season. It displays outstanding game use, is un-cracked and there are ball marks, stitch impressions and green bat rack streaks – most likely from the dugout of Ebbets Field, on the barrel. The barrel also shows signs of alterations by Robinson with a ¼-inch removed from the top to help reduce the weight of the bat. There is a light coating of vintage pine tar on the handle. Adding to this already one-of-a-kind gamer is the blue ballpoint pen signature of Jackie himself on the barrel. Comes with a LOA from PSA/DNA for the game use, having been graded a perfect GU 10 and an additional LOA from PSA/DNA for his signature.

Lot #7 – 1916-1921 George Sisler Game Used Hillerich & Bradsby Pre Model Bat Used for Record 257th Hit in 1920 (PSA/DNA GU 10) — Attached to the barrel is a label from the Louisville Slugger traveling display that reads “13. GEORGE SISLER (MEMBER OF BASEBALL’S HALL OF FAME) Clouted with this Louisville Slugger his 257th hit – a home run – of the 1920 season, establishing an all-time A.L. record for most hits in one season. That information is not accurate as Sisler’s last home run of the 1920 season was on his 252nd hit. The Louisville Slugger traveling display featured 20 bats of the greatest hitters in the game, each labeled with its history. Comes with a LOA from PSA/DNA (I02143) and was graded the highest grade of GU 10. 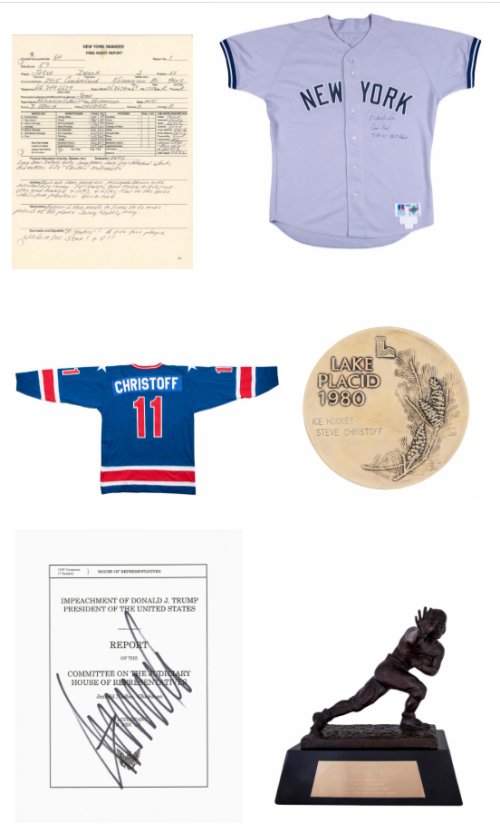